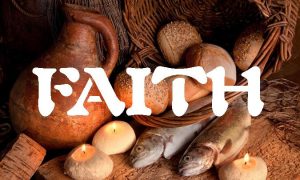 God deals in abundance, and left-over’s. As we are thinking about biblical numbers, 4000 and 5000 have some significance with miraculous feedings, and it also seems that the leftovers from those feeding events were important.

Now when Jesus heard this, he withdrew from there in a boat to a deserted place by himself. But when the crowds heard it, they followed him on foot from the towns. When he went ashore, he saw a great crowd; and he had compassion for them and cured their sick. When it was evening, the disciples came to him and said, “This is a deserted place, and the hour is now late; send the crowds away so that they may go into the villages and buy food for themselves.” Jesus said to them, “They need not go away; you give them something to eat.” They replied, “We have nothing here but five loaves and two fish.” And he said, “Bring them here to me.” Then he ordered the crowds to sit down on the grass. Taking the five loaves and the two fish, he looked up to heaven, and blessed and broke the loaves, and gave them to the disciples, and the disciples gave them to the crowds. And all ate and were filled; and they took up what was left over of the broken pieces, twelve baskets full. And those who ate were about five thousand men, besides women and children.
Matthew 14:13-21

Then Jesus called his disciples to him and said, “I have compassion for the crowd, because they have been with me now for three days and have nothing to eat; and I do not want to send them away hungry, for they might faint on the way.” The disciples said to him, “Where are we to get enough bread in the desert to feed so great a crowd?” Jesus asked them, “How many loaves have you?” They said, “Seven, and a few small fish.” Then ordering the crowd to sit down on the ground, he took the seven loaves and the fish; and after giving thanks he broke them and gave them to the disciples, and the disciples gave them to the crowds. And all of them ate and were filled; and they took up the broken pieces left over, seven baskets full. Those who had eaten were four thousand men, besides women and children.
Matthew 15:32-39

After feeding 5000 men (and many other women and children) there were still twelve baskets filled with leftovers. (12 – one for each of the disciples to see the bounty of God.) After feeding 4000 men (besides women and children) there were still seven baskets full of leftovers. (7 – the perfect number – the sign of completion). The miraculous feedings of Jesus occurred to supply food to the hungry crowds, and to instill great confidence in God’s unending power to those who pay attention to the signs of faith.

Are we watching so closely to what Christ is doing in our lives that we are both fed and inspired?

God, I thank You today for not only filling me to the brim, but also for how You show me that You still have grace, love, and power in reserve if I need a little more. In Jesus’ name I pray. Amen.