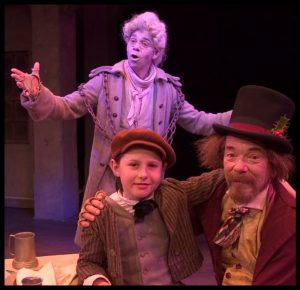 One of my favorite things about Christmas is a tradition we started many years ago when Hadley and Sadie were much younger (they are 20 and 18 now). This tradition, however, has its roots in a much earlier period of my life; specifically, while I was in college in the late 1980s.

As a student at the University of Florida, I majored in English and studied a great deal of literature. Naturally, my coursework included works by Charles Dickens. I had never been to a production of any of Dickens’s works, but when I found out I could go see a staged production of A Christmas Carol at the Hippodrome Theatre in Gainesville for the price of an unwrapped toy, I jumped at the opportunity. I had little reason to know that going to this play would be the start of a long-standing family tradition.

I saw the Hippodrome’s production of a Christmas Carol three years in a row while a student in Gainesville. Each time, I went on the first Saturday night in December when admission was an unwrapped toy. This worked for me financially and because it was the performance during the weekend before finals. Also, each year before the performance, I would read Dickens’s novel before attending the show.

After graduation, I moved from Gainesville to take my first job. In the subsequent years, I did not continue to see performances at the Hippodrome, but I did continue to read A Christmas Carol each year before Christmas Eve. It was not until after I married and had kids that it occurred to me to share my fond memories of this play with my family.

After checking to see if the Hippodrome was still performing the play during the season, I bought tickets for my young family. We went on the first Saturday of December but, alas, had to pay real money for admission this time! I was so happy to discover that the Hippodrome’s play had not, over the years, lost any of its power to surprise and delight. Based on my family’s response to the show, we have made an annual trek to Gainesville to spend the first weekend in December with Charles Dickens and the Gators.

My little girls are both in college now, one at UF and the other at UCF. A few weeks ago, tickets went on sale for this year’s production of the play. Not sure how the kids would feel about seeing the show now that they are busy adults or if they’d have a weekend to spare during finals, I texted them to see if they wanted to go again this year. Their responses were “Heck, yeah!” and “Duh, Dad!”. My heart warms knowing that this play, and more importantly, the sentiments expressed by Dickens within the work, are still very important to them.

So, many years removed from my college days, I purchased four tickets for the 40th anniversary performance of A Christmas Carol at the Hippodrome Theatre. As usual, we’ll be seeing it on the first Saturday of December. And yes, it is still one of our favorite things about Christmas!

Lord of our worship, we thank You for the scriptures’ that illustrate how encounters with Christ changes’ people lives. We thank You for literature that reminds us how our lives are transformed by You. Help us to be a blessing to others and to pray as “Tiny Tim’. “God Bless us every one.” Amen.