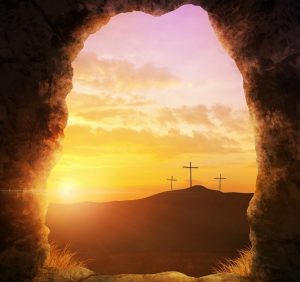 When evening had come, and since it was the day of Preparation, that is, the day before the sabbath, Joseph of Arimathea, a respected member of the council, who was also himself waiting expectantly for the kingdom of God, went boldly to Pilate and asked for the body of Jesus. Then Pilate wondered if he were already dead; and summoning the centurion, he asked him whether he had been dead for some time. When he learned from the centurion that he was dead, he granted the body to Joseph. Then Joseph bought a linen cloth, and taking down the body, wrapped it in the linen cloth, and laid it in a tomb that had been hewn out of the rock. He then rolled a stone against the door of the tomb. Mary Magdalene and Mary the mother of Jesus saw where the body was laid.
Mark 15:42-47

After these things, Joseph of Arimathea, who was a disciple of Jesus, though a secret one because of his fear of the Jews, asked Pilate to let him take away the body of Jesus. Pilate gave him permission; so he came and removed his body. Nicodemus, who had at first come to Jesus by night, also came, bringing a mixture of myrrh and aloes, weighing about a hundred pounds. They took the body of Jesus and wrapped it with the spices in linen cloths, according to the burial custom of the Jews. Now there was a garden in the place where he was crucified, and in the garden there was a new tomb in which no one had ever been laid. And so, because it was the Jewish day of Preparation, and the tomb was nearby, they laid Jesus there.
John 19:38-42

Among the people of Jewish faith who were leaders in Jerusalem at the time of Jesus’ death, we find a man named Joseph of Arimathea. One gospel source says he was rich. He was member of the council. He was eagerly waiting for the coming of God’s kingdom. He was a secret follower of Jesus. And he was finally bold enough to go and speak to Pilate to ask for the body of Jesus, the recently crucified criminal/zealot/Lord. His faith was strong, and he showed the boldness of his convictions when all was on the line.

It’s funny to me, but most contemporary followers of Jesus may have either been annoyed or concerned by Joseph. That is until he provided the tomb for the burial of their Lord, his Lord. “For fear of the Jews” he only visited Jesus by night. Maybe, out of concern for his place of respect and authority on the council, he didn’t broadcast his faith in the public arena. But he will always be remembered as the person who risked it all to honor our Lord when it counted.

Is a deeply private faith OK with us? Is it OK with God?

Dear God, strengthen my faith in private. Intensify my eagerness for Your Kingdom to come in its fullness. Let me know when any other display of my faith is necessary. I ask this in the name of the Lord Jesus, whom I follow. Amen.