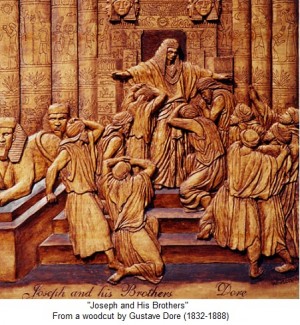 And he kissed all of his brothers and wept upon them, and after that his brothers talked to him. Genesis 45:15 (NRSV)

For some weeks now we have been reading the saga of Jacob, his favorite son, Joseph, and Joseph’s brothers. We have read of the favoritism that Jacob showed this eldest son by his wife, Rachel. We have read how Joseph interpreted and freely shared the meaning of his dreams and how these incited sibling rivalry. Joseph’s brothers were not happy when he showed off his father’s gift, a multi-colored/long sleeved coat, to his brothers. We have read how Joseph’s brothers, filled with anger and resentment, plotted against him …first, entertaining the idea of killing him, and later reconsidering his fate and making a profit by selling him to some traveling Ishmaelites. We have read how his brothers confiscated the “infamous coat” stained it with blood, presented it to Jacob and thus deceived their father into believing that Joseph had been killed by a wild beast. We know how much Jacob grieved for his son and have seen how over-protective he became with Benjamin, Joseph’s younger brother.

In today’s reading we see how Joseph can no longer allow the charade to play out. He reveals his identity to his brothers. He is so overcome with emotion that his wails are heard from his household to that of Pharaoh’s. “Joseph kissed all of his brothers and wept upon them, and after that his brothers talked with him.” It is a mushy-gushy story! The way is clear now for a wonderful family reunion of Jacob and his son Joseph and a full reconciliation between Joseph and his brothers. If this was a fairy tale, we could conclude by saying, “And they all lived happily ever after,” but it is real life and so what we have is a Happy Ending, but it also signals a Happy Beginning. Jacob, Joseph, Benjamin and Joseph’s brothers and their families could now live together and be at peace with one another having let bygones be bygones and God bring wholeness to this once fractured and dysfunctional family.

O God, we know that you love happy endings and we do too. Help us to see that in the happy endings of life we also enter into a Happy Beginning. With reunions and reconciliation, there comes a renewed commitment to living in harmony. In Jesus’ name, we pray. Amen.