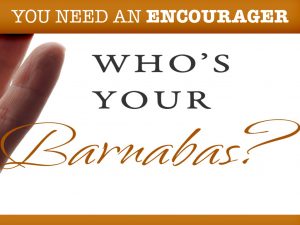 Now the whole group of those who believed were of one heart and soul, and no one claimed private ownership of any possessions, but everything they owned was held in common. With great power the apostles gave their testimony to the resurrection of the Lord Jesus, and great grace was upon them all. There was not a needy person among them, for as many as owned lands or houses sold them and brought the proceeds of what was sold. They laid it at the apostles’ feet, and it was distributed to each as any had need. There was a Levite, a native of Cyprus, Joseph, to whom the apostles gave the name Barnabas (which means “son of encouragement”). He sold a field that belonged to him, then brought the money, and laid it at the apostles’ feet.
Acts 4:32-37

Sometimes nicknames are intended to be comical (like a six-foot plus person named “Shorty”). Some nicknames can be caustic (come up with your own example). And some nicknames are nice. That’s the case with a man named Joseph, a native of Cyprus, whom the apostles gave the nickname Barnabas (which means “son of encouragement.”)

How did Joseph of Cyprus get this nickname? He sold a field that belonged to him, and generously donated the money to Christ’s church, laying it at the apostles’ feet. I would tend to agree that this was an encouraging act.

Would you like a nice nickname? Would you like to be remembered well? Consider doing something which is generous, nice, thoughtful, and encouraging.

Dear God, help to live my life today in a manner that will encourage someone along the way, as I walk in the path of my Lord and Savior, Jesus, in whose name I pray. Amen.