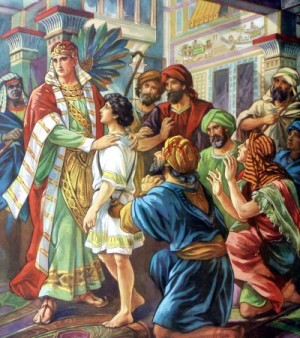 “If you take this one also away from me, and harm comes to him, you will bring down my gray hairs in sorrow to Sheol.’ ” Genesis 44:31 (NRSV)

It had been years since Jacob, now known as Israel, had lost his favorite son, Joseph, to whom he had given the long-sleeved or multicolored coat. His greatest consolation was that he had another highly favored son by his wife, Rachel, and that son’s name was Benjamin. For years Israel had lived grieving that his son, Joseph, was dead and that he had experienced a horrible death by being mauled by a vicious animal that carried his body off to a lair. All Israel had left were a tattered blood-stained coat and his memories of his much loved son!

For years all of Joseph’s older brothers had allowed their father to believe this deceit. Day after day they must have seen the grief etched on his face that might have been eased, if only they had broken their silence and acknowledged that Joseph was carried off by some Ishmaelites. Israel might at least have been comforted knowing that his son quite possibly was still alive. The brothers never flinched.

Now they need to leave Canaan and go to Egypt once again to buy grain and to secure the release of Simeon. In addition to money and gifts, they are required to bring Israel’s youngest son, Benjamin. Jacob does not want to let Benjamin go. Judah has pledged to his father that he will protect Benjamin and bring him back safely. Joseph now wants to hold Simeon and Benjamin as hostages, while the brothers return to Canaan. Judah now tells Joseph the sordid story and offers to remain there while the other brothers and Benjamin return to Canaan. Judah knows that if Benjamin does not return then Israel will surely die of grief.

Jacob had borne the anguish of having lost Joseph. He does not know that Simeon is held captive under the watchful eye of Joseph and so he is bereft of this son. Now he is being faced with the prospect of losing Benjamin, his second most favorite son. He feels that should he lose this son, he will lose his grip on life itself. Judah realizes that scenario is distinctly possible and so he pledges himself as surety for the safe return of Benjamin.

Holy Comforter, draw near to all those parents who grieve the death of a child. Envelop them in Your arms as securely as they have held their own child in their arms. Console their troubled hearts, fill them with hope and grant them Your peace. In Jesus’ name, we pray. Amen.