A Pass It O: Mother Teresa of Calcutta 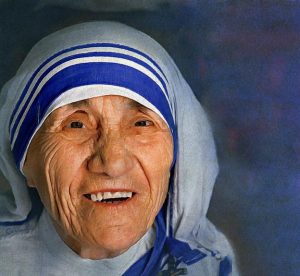 29 But wanting to justify himself, he asked Jesus, “And who is my neighbor?” 30 Jesus replied, “A man was going down from Jerusalem to Jericho, and fell into the hands of robbers, who stripped him, beat him, and went away, leaving him half dead. 31 Now by chance a priest was going down that road; and when he saw him, he passed by on the other side. 32 So likewise a Levite, when he came to the place and saw him, passed by on the other side. 33 But a Samaritan while traveling came near him; and when he saw him, he was moved with pity. 34 He went to him and bandaged his wounds, having poured oil and wine on them. Then he put him on his own animal, brought him to an inn, and took care of him. 35 The next day he took out two denarii,[k] gave them to the innkeeper, and said, ‘Take care of him; and when I come back, I will repay you whatever more you spend.’ 36 Which of these three, do you think, was a neighbor to the man who fell into the hands of the robbers?” 37 He said, “The one who showed him mercy.” Jesus said to him, “Go and do likewise.”

Mother Teresa was born Agnes Gonxha Bojaxhiu in Skopje, Macedonia, on August 26, 1910.. At the age of twelve, she felt strongly the call of God. She knew she had to be a missionary to spread the love of Christ. At the age of eighteen she left her parental home in Skopje and joined the Sisters of Loreto, an Irish community of nuns with missions in India. After a few months’ training in Dublin she was sent to India, where on May 24, 1931, she took her initial vows as a nun. From 1931 to 1948 Mother Teresa taught at St. Mary’s High School in Calcutta, but the suffering and poverty she glimpsed outside the convent walls made such a deep impression on her that in 1948 she received permission from her superiors to leave the convent school and devote herself to working among the poorest of the poor in the slums of Calcutta. Although she had no funds, she depended on Divine Providence, and started an open-air school for slum children. Soon she was joined by voluntary helpers, and financial support was also forthcoming. This made it possible for her to extend the scope of her work.

On October 7, 1950, Mother Teresa received permission from the Holy See to start her own order, “The Missionaries of Charity”, whose primary task was to love and care for those persons nobody was prepared to look after

Author Robert Fulghum, in his book All I Really Need to Know I Learned in Kindergarten shares some of his reflections on Mother Teresa’s work and words:

Some years later, at a grand conference of quantum physicists and religious mystics at the Oberoi Towers Hotel in Bombay, I saw that face again. Standing at the door at the rear of the hall, I sensed a presence beside me. And there she was. Alone. Come to speak to the conference as its guest. She looked at me and smiled. I see her face still.

She strode to the rostrum and changed the agenda of the conference from intellectual inquiry to moral activism. She said, in a firm voice to the awed assembly: “We can do no great things; only small things with great love.”

Help me to pause beside someone in need today, and offer some small deed with great love, as I live as a follower of my Lord and Savior Jesus, in whose name I pray. Amen.