A Pass It On: Will Davis Campbell 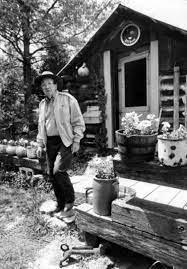 36 Then Jesus went with them to a place called Gethsemane; and he said to his disciples, “Sit here while I go over there and pray.” 37 He took with him Peter and the two sons of Zebedee, and began to be grieved and agitated. 38 Then he said to them, “I am deeply grieved, even to death; remain here, and stay awake with me.” 39 And going a little farther, he threw himself on the ground and prayed, “My Father, if it is possible, let this cup pass from me; yet not what I want but what you want.” 40 Then he came to the disciples and found them sleeping; and he said to Peter, “So, could you not stay awake with me one hour? 41 Stay awake and pray that you may not come into the time of trial;[e] the spirit indeed is willing, but the flesh is weak.” 42 Again he went away for the second time and prayed, “My Father, if this cannot pass unless I drink it, your will be done.” 43 Again he came and found them sleeping, for their eyes were heavy. 44 So leaving them again, he went away and prayed for the third time, saying the same words. 45 Then he came to the disciples and said to them, “Are you still sleeping and taking your rest? See, the hour is at hand, and the Son of Man is betrayed into the hands of sinners. 46 Get up, let us be going. See, my betrayer is at hand.”

Will Davis Campbell died in 2013 at the age of 88. He was writer, preacher, farmer, and social activist. A native of Mississippi and graduate of both Wake Forest University and Yale Divinity School, Will served in the South Pacific in World War II, as university chaplain, and during the 1950’s and 1960’s, he was among the most conspicuous white Southerners in the civil rights movement.

Nearly 30 years ago I heard Will Campbell speak at a lecture series at Columbia Theological Seminary. His words then, and his writings have nudged me beyond complacency in my own faith journey, in my times of belief and unbelief. Campbell writes:

When you write books for a living, paydays are sometimes sporadic. Some years ago my wife said one of us had to get out and find real work. I sensed a preference. Waylon Jennings, a neighbor and old friend, gave me the prestigious position of cook on his tour bus. Waylon is not noted for excessive piety, but I learned an important theological lesson from him. Late one night I said, “Waylon, what do you believe?”

“Yeah,” he answered. On an overnight stagecoach, a conversation needs not be rushed. After a long silence I asked, “Yeah? What’s that supposed to mean?” Quiet again until Waylon said, “Uh-huh.” That ended my prying into the state of ole Waylon’s soul.

Today we are bombarded with a theology of certitude. I don’t find much biblical support for the stance of “God told me and I’m telling you, and if you don’t believe as I do you’re doomed.” A sort of ‘my god can whip your god’ posture. From Abraham, going out by faith not knowing where he was being sent, to Jesus on the cross, beseeching the Father for a better way, there was always more inquiring faith than conceited certainty.

It occurs to me that the troubadour’s response that late night might have been the most profound affirmation of faith I had ever heard. “Yeah, I believe. Don’t bother me with all the baggage.” Recently he wrote a song about that long-ago conservation. “In my own way I’m a believer” he sings.

Maybe that’s as close as any of us every get.

Will D. Campbell Soul Among Lions: Musings of a Bootleg Preacher

I thank You, God, for the moments when I know what I believe and I take those steps forward in faith. And I thank You for a faith that is still mine even in the moments where I am not that certain. Let me trust in You, and let others place their trust in you, as I continue to roll on down the road of life as a follower of Jesus, in whose name I pray. Amen.