A Picture of Total Abandonment 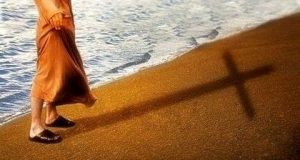 Immediately, while he was still speaking, Judas, one of the twelve, arrived; and with him there was a crowd with swords and clubs, from the chief priests, the scribes, and the elders. Now the betrayer had given them a sign, saying, “The one I will kiss is the man; arrest him and lead him away under guard.” So when he came, he went up to him at once and said, “Rabbi!” and kissed him. Then they laid hands on him and arrested him. But one of those who stood near drew his sword and struck the slave of the high priest, cutting off his ear. Then Jesus said to them, “Have you come out with swords and clubs to arrest me as though I were a bandit? Day after day I was with you in the temple teaching, and you did not arrest me. But let the scriptures be fulfilled.” All of them deserted him and fled. A certain young man was following him, wearing nothing but a linen cloth. They caught hold of him, but he left the linen cloth and ran off naked.
Mark 14:43-52

I have a minister friend who, one summer, preached a series of sermons that he called “Tales From the Script.” He said that for the summer series he picked some of the often over-looked, almost bizarre biblical passages. I wonder if he used “the one about the boy who ran away naked”?

In Mark chapter 14, Jesus is betrayed by one of his close friends. As He is arrested, His other close friends desert Him and flee. The scene is pretty stark. Jesus is all alone. Then Mark gives us one more image to ponder, an image of total abandonment:

A certain young man was following him, wearing nothing but a linen cloth. They caught hold of him, but he left the linen cloth and ran off naked.

Have you ever done something that denied that Jesus was your Savior? (Then join the crowd.)

Have you or I ever said something that called into question whether Jesus truly was our Lord?

Have we ever found ourselves in a situation where standing firm in our Christian faith would put us at odds with those around us — and we wanted to run away so badly from the faith that we claim to hold dear that even grabbing us by the shirt (or shorts) wouldn’t keep us there?

When we deny and abandon our Lord Jesus, it sure feels embarrassing.

God, help me to walk the walk and talk the talk that shows the world that I am truly a follower of Jesus. Keep me faithful and unashamed in holding up the name of Jesus. Amen.