A Prophetic Word from Haggai 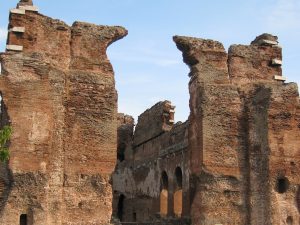 One of the twelve Old Testament books that we often refer to as “The Minor Prophets” bears the name Haggai.

Haggai was known for encouraging the people of God to rebuild the Temple, God’s house.

After years of domination by other nations, in around 580 BC, Cyrus conquered Babylon and allowed captive Jews to return to Palestine. He instructed them also to rebuild the Temple in Jerusalem. They returned home, but failed to make a home for God. So:

Thus says the Lord of hosts: Consider how you have fared. Go up to the hills and bring wood and build the house, so that I may take pleasure in it and be honored, says the Lord. You have looked for much, and, lo, it came to little; and when you brought it home, I blew it away. Why? says the Lord of hosts. Because my house lies in ruins, while all of you hurry off to your own houses. Therefore the heavens above you have withheld the dew, and the earth has withheld its produce. And I have called for a drought on the land and the hills, on the grain, the new wine, the oil, on what the soil produces, on human beings and animals, and on all their labors.

Then Zerubbabel son of Shealtiel, and Joshua son of Jehozadak, the high priest, with all the remnant of the people, obeyed the voice of the Lord their God, and the words of the prophet Haggai, as the Lord their God had sent him; and the people feared the Lord. Then Haggai, the messenger of the Lord, spoke to the people with the Lord’s message, saying, I am with you, says the Lord. And the Lord stirred up the spirit of Zerubbabel son of Shealtiel, governor of Judah, and the spirit of Joshua son of Jehozadak, the high priest, and the spirit of all the remnant of the people; and they came and worked on the house of the Lord of hosts, their God, on the twenty-fourth day of the month, in the sixth month.
Haggai 1

I spend lots of my free time working on my house. I mow the yard once a week. Every few years I paint (inside or out). This summer, Teresa and I built a privacy fence around the entire back yard (270 feet, over 800 boards, but I digress).

The question may be posed – Do I take that much pride in building, maintaining, and caring for God’s house? Doing so may help me make sure that the focus isn’t just about me.

Help me, Lord, to listen for the message of Your servant Haggai as I consider how well I have fared, and then keep my focus on You as the one who has blessed me so richly. Amen.