A Prophetic Word from Nahum 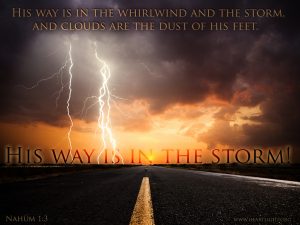 One of the twelve Old Testament books that we often refer to as “The Minor Prophets” bears the name Nahum.

Where many of the Old Testament prophecies are aimed at the Hebrew/Israelite people of God, some words of some of the prophets are here for us to overhear, so we know that God is an “equal opportunity demander of justice.” Here we go with Nahum.

The Assyrians were a ruthless and cruel domineering power in the mid-east. Their capital was a city called Nineveh. Most of God’s people (remember Jonah?) feared and hated these horrible neighbors. Nahum helped proclaim the message of God’s judgment on these un-godly people, and their city which was “full of bloodshed, booty, and plunder.”
Nahum 3:1

As the Israelites sat on the sidelines and cheered God on in this battle over their obviously evil foes, the prospect of the destruction of the Ninevites was rich:

I am against you, says the LORD of hosts, and will lift up your skirts over your face; and I will let nations look on your nakedness and kingdoms on your shame. I will throw filth at you and treat you with contempt, and make you a spectacle. Then all who see you will shrink from you and say, “Nineveh is devastated; who will bemoan her?” Where shall I seek comforters for you?
Nahum 3:5-7

Sometimes it helps to know that God is aware of the evil things others do to us. I just have to be careful in my gloating, that I don’t withhold God’s grace from those who have harmed me. (Remember Jonah?)

Give me Your heart, O God, that I can wish and work of justice in a pure and compassionate fashion to all. In Jesus’ name I pray. Amen.