A Reason to Laugh and Smile 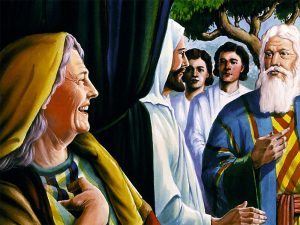 Many of us have, at one time, told a joke that needed a long “set-up.” We have felt it necessary to tell the back story of the characters to get everything right for the punch- line. The arrival of a baby named “Laughter” follows the same pattern.

It had been 25 years since God called, and Abraham and Sarah followed. It had been decades that they had lived and believed in a promise that they would be the father and mother of a great nation, and yet nothing had happened to make the dream seem like a reality.

In telling the story or Abraham and Sarah’s visitors, the Spark Story Bible records the conversation between God’s long overdue messengers and this old couple as such:

“Your wife, Sarah, will have a son,” the visitors said to Abraham. Sarah started to laugh. Didn’t they know that she was too old to have a child?

The visitors looked up. “Why is Sarah laughing?” they asked. “Doesn’t she believe God’s promise will happen?”

God’s promise to Abraham did happen! Sarah had a baby boy and named him Isaac, which means “laughter.” Abraham and Sarah’s family grew and grew and grew and God blessed each generation with laughter and happiness.”

To think that two old people who had tried unsuccessfully their whole married life to have a baby would finally get their wish was too good to be true. And when, with God’s action, the impossible happened, the joy could only be captured in a belly laugh and a child named “Laughter.”

When God promises us things that we think are too good to be true – a smile and joy might not be too far away.

Help me to believe Your promises to me, and to be ready to greet them as they arrive with pure joy.