A Subtle Reminder of Our Place 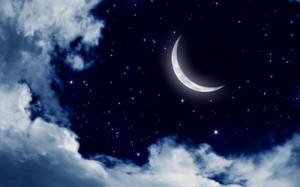 “When I consider Thy heavens the work of Thy fingers, The moon and the stars which Thou hast ordained; What is man that Thou dost take thought of him? And the son of man, that Thou dost care for him? Yet Thou hast made him a little lower than God,….” Psalm 8:3-5a (NASV)

Psalm 8 has long been one of my favorite chapters of the Bible’s hymnbook. As with many scriptures of which we are familiar, we can often be surprised by what we discover upon reading the passage again. This activity of the Holy Spirit describes what I have experienced as I sit down to reflect upon these words.

What strikes me is that the sun is not mentioned of those celestial bodies giving light to the earth in this psalm. In the first Creation story found in Genesis 1:1-2:4a we are told how God made the heavens and the earth. In verse 16 we read, “And God made the two great lights, the greater light to govern the day, and the lesser light to govern the night; He made the stars also.” The greater lights unlike the lesser lights of stars are not even mentioned by name in that verse, but the light governing the day is the greater of the two. Could this be a reference to the ineffable name of God? As the personal name of God was not to be spoken by the Jews so the name of the greatest light is not even given. It certainly serves as a reminder that this greater light is in a class by itself as is the One who created the lights.

As the sun is the greater light compared to the moon and stars, so God is greater than human beings. We have been made a little lower than God, yet God still crowned us with glory and majesty. As Genesis 1:27 declares we have been made “in the image of God,” but we are not God. In verse 26 as God announced the idea to make humankind in God’s image, so God decreed that humankind would rule over all living creation. We find ourselves between God and all creation. So where is our place? In the middle … a little less than God and ruling over all other living creatures. We have been given great responsibilities ruling over all other creatures and in doing so we are called to exercise the loving care that God has shown us.

Creator God, like the Psalmist we are amazed at the beauty and wonder of your creation. Whenever we gaze up at the sun, moon and stars, we do sense that we are very minute in all that You have made. We thank You for the reassurance that You gave the Psalmist that has been handed down to us. Keep us ever mindful of our place within Your creation … of bowing before You in reverence and worship and of ruling over all creation by ever showing the loving care of our Creator. In Jesus’ name, we pray. Amen.