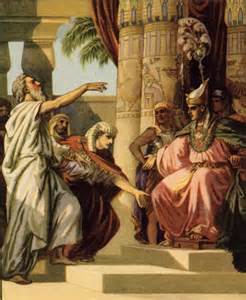 The Lord was with Joseph so that he prospered, and he lived in the house of his Egyptian master. When his master saw that the Lord was with him and that the Lord gave him success in everything he did, Joseph found favor in his eyes and became his attendant. Potiphar put him in charge of his household, and he entrusted to his care everything he owned. From the time he put him in charge of his household and of all that he owned, the Lord blessed the household of the Egyptian because of Joseph. The blessing of the Lord was on everything Potiphar had, both in the house and in the field. So Potiphar left everything he had in Joseph’s care; with Joseph in charge, he did not concern himself with anything except the food he ate. Genesis 39:2-6

Potiphar was a lucky man. He just so happened to “purchase” this slave Joseph from the Ishmaelites and it turns out once Joseph came into the house of Potiphar, everything started to prosper. The Lord was with Joseph and now because of Joseph, the Lord was blessing Potiphar and all that he had as well. Potiphar definitely “lucked up” with this investment in Joseph. Because of his talents, Potiphar left Joseph in charge of everything. That’s hard for me to even imagine leaving one person in control, since I’m a bit of a control freak, but Potiphar did and things went well for him. It would be nice if the story ended just like that, but greed, deceit, and lies soon came about. But Joseph continued to be faithful to our Lord and stayed true to Him and even when the enemy meant for evil to occur, the Lord continued blessing Joseph.

This definitely reminds me of the story of Joseph and of us. Even when we are in the valley, He is faithful and He is working for our good. Let this refrain be our prayer for the day.