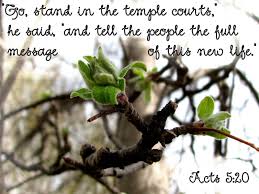 At this point in Acts it seems as if the story by Luke is being repeated again and again! The apostles were fully committed and directed by God’s Spirit to not let Jesus be forgotten. Luke tells us again and again that the high priest put all those who were followers of Jesus in jail. But this action, rather than destroy the faith of those who believed, made them stronger in their faith and  in their commitment to the risen Jesus.

I remember way back when I was a kid, some buddies and I would follow the fire truck as it drove to where the empty field was burning. It was exciting and fun to be able to help douse the fire with rakes, shovels and brooms. The firemen would tell us how to use these tools to put the fire out rather than spreading it by coming down on top of the flames rather coming from the side. Sometimes action taken to sniff out a fire, such as the faith of Christ, actually spreads it. This is what seemed to be happening as apostles wanted to spread the Word of God by standing near the temple and teaching the people. The rulers did not know for sure what to do with them, but by throwing them in jail they hoped this would stop their faith from spreading. Yet, no sooner were they jailed than they were back out publicly teaching The Good News of Jesus. This Jesus, who man put on the cross, rose again. Christ rose again and again to help all who turned to him and receive the gift of life. For those who shared the Good News, though put in jail, did not stop sharing what they believed. Sharing what they knew before long put them out of prison and back on the street, and then back into prison.

So it seemed as if the very people who confessed their faith, their belief, in the teaching of Christ could not be silenced.  Sharing what they saw through the miracle of Jesus helped the movement and the believers who were teaching the good news again and again. In trying to put out the faith of the early church, the Sadducees were making it more interesting. The Pharisees, instead of putting out the spirit of the active believers, made those who were sincere followers of Christ even more active. They helped the spreading of the power of Christ over again and again by arresting, and then freeing those who served the first Christian fellowship. By freeing them, the first believers helped to put the flame out again and again to attract others to Christ Jesus. It is my prayer for you that, as Jesus came alive to all who first believed, you will allow Jesus to become your personal Savior.

Loving God, though I am not worthy of Your Eternal Love, may I give of myself over again and again and again as I live and serve Your kingdom here on earth, preparing me for the Kingdom to Come. In Jesus name I pray. Amen.