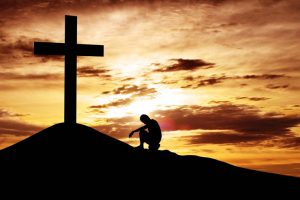 In Caesarea there was a man named Cornelius, a centurion of the Italian Cohort, as it was called. He was a devout man who feared God with all his household; he gave alms generously to the people and prayed constantly to God. One afternoon at about three o’clock he had a vision in which he clearly saw an angel of God coming in and saying to him, “Cornelius.” He stared at him in terror and said, “What is it, Lord?” He answered, “Your prayers and your alms have ascended as a memorial before God. Now send men to Joppa for a certain Simon who is called Peter; he is lodging with Simon, a tanner, whose house is by the seaside.” When the angel who spoke to him had left, he called two of his slaves and a devout soldier from the ranks of those who served him, and after telling them everything, he sent them to Joppa.
Acts 10:-18

Chapters 10 and 11 of the Acts of the Apostles tell an interesting story of how the Good News of what God has done for us in Jesus Christ was finally told to people like you and me (or should I say to people unlike the first Jewish followers?) But, before we get to the tale of Peter, the Holy Spirit, and God’s freeing news, we are introduced to a man named Cornelius. And what an introduction:

In Caesarea there was a man named Cornelius, a centurion of the Italian Cohort, as it was called. He was a devout man who feared God with all his household; he gave alms generously to the people and prayed constantly to God.

Cornelius was an officer in the Roman army. He was a man of position and power (he commanded 100 troops.) And Cornelius was a believer. He feared and respected God, and taught his whole family (household) to do the same. He was generous (giving alms to the people). And he talked to God constantly in prayer. The story goes on to say that God used him for good.

In reading about Cornelius, I have to pause and wonder how I might be described, if anyone chose to introduce me in a story of faith. Would I be called a believer? Would my family agree with this contention? Would people say that I was generous? Would God know that I had been in touch regularly in prayer? I hope so. I’m the one who can see to it that this is so.

Dear God, I hope that You note a familiar sound when You hear my voice in prayer. Help me to walk the walk with Jesus each day so that I might be faithful, devout, and generous today and every day. Amen.