And They’ll Know We Are Christians 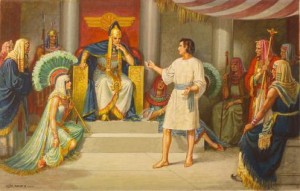 The LORD was with Joseph so that he prospered, and he lived in the house of his Egyptian master. When his master saw that the LORD was with him and that the LORD gave him success in everything he did, Joseph found favor in his eyes and became his attendant. Potiphar put him in charge of his household, and he entrusted to his care everything he owned. From the time he put him in charge of his household and of all that he owned, the LORD blessed the household of the Egyptian because of Joseph. The blessing of the LORD was on everything Potiphar had, both in the house and in the field. Genesis 39: 2- 5 (NIV)

Joseph’s master took him and put him in prison, the place where the king’s prisoners were confined.

But while Joseph was there in the prison, the LORD was with him; he showed him kindness and granted him favor in the eyes of the prison warden. So the warden put Joseph in charge of all those held in the prison, and he was made responsible for all that was done there. The warden paid no attention to anything under Joseph’s care, because the LORD was with Joseph and gave him success in whatever he did. Genesis 20-23 (NIV)

Joseph’s life story continues. After his brothers sold him into slavery, he ended up in the house of Potiphar who was an official of the Pharoah. Potiphar put Joseph in charge of everything he owned. It is hard to imagine such a high ranking official putting a slave in charge of his entire household! It seems quite the soap opera when Potiphar’s wife tries to seduce Joseph. Joseph’s rejection of her advances causes her to lie to her husband and accuse Joseph of wrong doing. And that is how Joseph ends up in prison. In prison Joseph’s story does a repeat when the prison guard puts him in charge of everything at the prison. A prisoner in charge of the prison!

Where does this trust in Joseph come from? Both Potiphar and the prison guard saw that “the Lord was with him”. They recognized Joseph lived with the grace of God and basically trusted Joseph with their lives. It makes me think of the words to one of our hymns:

I wonder if my belief in the Lord shows in the way I live my life. Does my love of the Lord and my actions, words and deeds spill over to others so that they may also find trust and peace in the Lord?

Dear God, help us to live our lives as an example of Your grace and peace. Help us to continue to grow in understanding and charge us with the energy to serve as Your disciples in spreading the Good News.