Angels We Have Heard on High 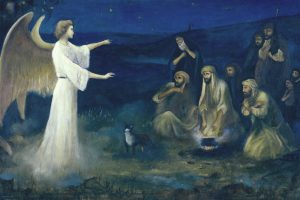 The angels play a significant role in announcing the birth of Christ and the coming reign of God. The other-worldly angelic proclamation also serves to open the scene to earthly beings, like the shepherds, who will join in glorifying and praising God.

The message of the heavenly choir enthralls and inspires earthly choristers in the carol “Angels We Have Heard on High.” By including this song as selection 113 in the Glory to God Presbyterian Hymnal the editors help us to celebrate Christ’s birth along with the angels. They note that “this French carol probably dates from the 1700s, though it was not printed until the following century. Because it uses a vernacular language for the narrative stanzas and Latin for the refrain, it belongs to a special category called “macaronic” or mixed-language texts.”

The invitation was there for the shepherds, and it is there for us, to join in giving God the glory.

God my Creator, You have given me a mouth to speak Your praise, and another year in which to do that. Help me to spend time each day glorifying Your name, as a disciple of Your Son, my Lord and Savior Jesus. Amen.