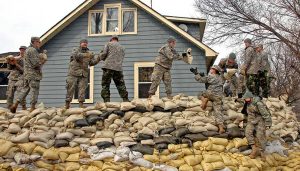 The beginning of strife is like letting out water;
so stop before the quarrel breaks out.

Have you ever noticed how a trickle can become a flood? I think there is some physics involved in the whole thing. (But I got my undergraduate degree in Interdisciplinary Social Sciences, so consider the source.) Regardless of how the process evolves, I have often heard in some news accounts the lamentable line that “We weren’t able to stop it early, and it just got out of control.”

The writer of Proverbs could have been quoted as well. “The beginning of strife is like letting out water …..” The drip, drip, drip is how the dam-breaking flood sometimes begins.

This wisdom writer goes on to say, “So stop the quarrel before it breaks out.” A swift response to a disagreement may keep it from escalating. Making a direct contact with the person with whom you are feeling some conflict, rather than branching out to talk to several other people, may keep the flood waters within bounds. In the words of Barney Fife, one of my favorite characters in the fictional land of Mayberry, it’s best to “Nip it in the bud.”

Dear God, open my eyes to conflict, and direct my kips toward the right person so that neither of us get caught up in quarreling. Amen.