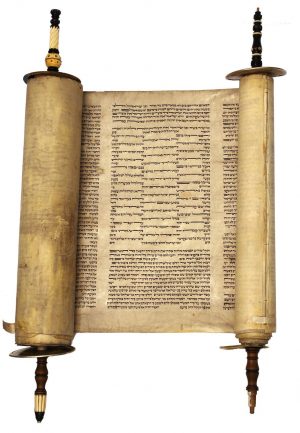 Then Jeremiah called Baruch, son of Neriah, and Baruch wrote on a scroll at Jeremiah’s dictation all the words of the Lord that He had spoken to him.
Jeremiah 36:4

Long before there was shorthand, the way of taking dictation using figures and strokes instead of spelling out the words with the alphabet, there was Hebrew! If you have ever looked at the Hebrew alphabet, then you know it would be more difficult to take dictation using those letters than our ABCs. The prophet Jeremiah recruited Baruch to write on the scroll the words of the Lord that God revealed to him. The word of the Lord came to the prophet Jeremiah during the fourth year of the reign of Jehoiakim over Judah. Now, Jehoiakim was the son of Josiah, who proved to be a good king, but under Jehoiakim’s reign Judah had turned to evil ways and God was hopeful that hearing what God intended to do might bring them to their senses and that they would repent.

Jeremiah calls Baruch and dictates the words of the Lord that the Lord had spoken to him. Jeremiah told Baruch it may be that the people’s plea will come before the Lord and that all of them will turn from their evil ways, for great is the anger and wrath that the Lord has pronounced against this people. Jeremiah was prohibited from going to the Lord’s house to read the scroll. In the fifth year of the reign of Jehoiakim a fast before the Lord was proclaimed. The people came from the towns of Judah to Jerusalem. Baruch went to the house of the Lord as Jeremiah instructed. He read the scroll and the people were alarmed. Their king needed to be notified of the contents of the scroll, but first they wanted to verify how and by whom the scroll was written. Upon learning that Baruch had written the scroll and taken it as dictation from Jeremiah, the people urged Baruch and Jeremiah to go into hiding.

Once Jehoiakim heard the scroll as it was read, he cut off pieces and threw them into the fire until the entire message was burned. The king ordered the arrest of Baruch and Jeremiah, but the Lord hid them. After hearing what Jehoiakim had done, the Lord was undaunted and told Jeremiah to write another scroll with the same message plus an addition. The addition: The Lord told the punishment that was forthcoming because the king and the people did not listen. Sad but true!

O Lord, help us to trust and obey Your Word to us. In Christ’s name, we pray. Amen.