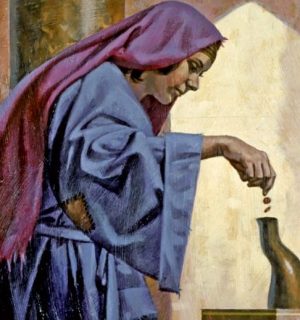 When the wife of Uriah the Hittite heard that her husband was dead, she made lamentation for him. When the mourning was over, David sent and brought her to his house, and she became his wife, …. II
Samuel 26-27c

From what we read in Chapter 11 at the beginning it seemed that Bathsheba only had a “fling with the king.” Bathsheba made her command performance by coming to the king and laying with him. She returned to her home and we are not given the impression that she made daily trips to the king’s palace, but she was an adulteress. What we do learn is that she becomes pregnant and thus presumably as a result of that single tryst with Kind David.

Bathsheba is married to Uriah the Hittite, a brave and noble warrior for King David. Bathsheba now discovers that she is with child and the father is not Uriah, but her king, David. The king has a problem and Bathsheba does too!

David then launches a plot to shift the fatherhood of Bathsheba’s child to Uriah. He sends for his soldier and invites him to take opportunity of his leave to go to his house and to lie with his wife. Aware of what other soldiers are experiencing on the battlefield, Uriah will not take advantage. David’s plan is foiled. David then tries to get Uriah drunk so that he will go to his house and lie with his wife. Again David’s plan is thwarted. As the final solution, David sends Uriah back to battle with a message for his commanding officer to put Uriah at the frontline of battle where he is certain to be killed. David’s treachery succeeds as Uriah is a casualty of war orchestrated by his king. Uriah proved to be a loyal and faithful servant to King David.

“When the wife of Uriah heard that her husband was dead, she made lamentation for him. When the mourning was over, David sent and brought her to his house and she became his wife ….” Bathsheba must have had a “roller coaster ride of emotions” from being a happy wife, a flirtatious woman in the prime of life, a willing adulteress, a mournful widow and a second time bride.

O God, we thank You that You do not fail us or forsake us in happy times, in trying times and in sad times. You are with us always! You give us the gift of peace that will ease that “roller coaster ride of emotions” we know in life. In Christ’s name, we pray. Amen.