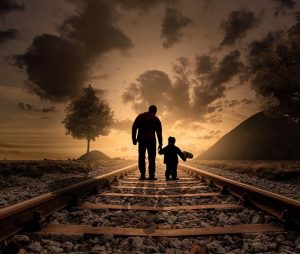 “Now his elder son was in the field; and when he came and approached the house, he heard music and dancing. He called one of the slaves and asked what was going on. He replied, ‘Your brother has come, and your father has killed the fatted calf, because he has got him back safe and sound.’ Then he became angry and refused to go in. His father came out and began to plead with him. But he answered his father, ‘Listen! For all these years I have been working like a slave for you, and I have never disobeyed your command; yet you have never given me even a young goat so that I might celebrate with my friends. But when this son of yours came back, who has devoured your property with prostitutes, you killed the fatted calf for him!’ Then the father said to him, ‘Son, you are always with me, and all that is mine is yours. But we had to celebrate and rejoice, because this brother of yours was dead and has come to life; he was lost and has been found.’”
Luke 15:11-32

“Come to me, all you that are weary and are carrying heavy burdens, and I will give you rest. Take my yoke upon you, and learn from me; for I am gentle and humble in heart, and you will find rest for your souls. For my yoke is easy, and my burden is light.”
Matthew 11:28-30

My faith is often challenged by the stories that Jesus told. One such story that speaks to me every time I settle in to re-read it is the parable of “The Prodigal Son.” No matter how I approach this story (as the disobedient wild child or the judgmental, less than grateful, obedient one) there is one factor that never changes — the father’s love.

Recently, as Alan Harvey and Sarah Bishop preached one Sunday on this text at different worship services, we heard it mentioned that this parable can be known by many titles. Most often, it is called “The Parable of the Prodigal Son.” (Prodigal here means wasteful. The younger son did indeed waste his father’s treasures in his dissolute living.) The story is also referred to as “The Parable of the Man and His Two Sons.” (Truly the story does touch on both of the man’s sons.) I have seen it suggested that the story can be called “The Parable of the Prodigal Father.” (If you stop and think about it, the father was wastefully extravagant in giving all that he had to both of his ungrateful children.) It might make the most sense to call this tale “The Parable of the Loving Father.” (The one thing that always rings through to me is the depth of the father’s love.)

Let me accept my place today in your family as a beloved child, and let that love define me and inspire me as I live today as a disciple of my Lord Jesus, in whose name I pray. Amen.