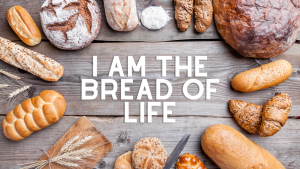 Do not work for food that spoils, but for food that endures to eternal life, which the Son of Man will give you. For on him God the Father has placed his seal of approval.”

Then they asked him, “What must we do to do the works God requires?”

Jesus answered, “The work of God is this: to believe in the one he has sent.”

So they asked him, “What sign then will you give that we may see it and believe you? What will you do? Our ancestors ate the manna in the wilderness; as it is written: ‘He gave them bread from heaven to eat.’”

Then Jesus declared, “I am the bread of life. Whoever comes to me will never go hungry, and whoever believes in me will never be thirsty. But as I told you, you have seen me and still you do not believe. All those the Father gives me will come to me, and whoever comes to me I will never drive away. For I have come down from heaven not to do my will but to do the will of him who sent me. And this is the will of him who sent me, that I shall lose none of all those he has given me, but raise them up at the last day. For my Father’s will is that everyone who looks to the Son and believes in him shall have eternal life, and I will raise them up at the last day.”

I often hear that for many newlyweds, the first fight is often over money. For Loli and I, our first big squabble was over bread. It was our first time grocery shopping as a couple and when we turned into the bread aisle, one reached for the wheat and one reached for the white. She argued with him that her bread was less expensive. His response, “By only two cents!” He argued for nutrition. She argued for taste. She then expressed her disappointment and disbelief at his display of stubbornness and selfishness; only weeks after he had professed his undying love and faithfulness in front of God and all our loved ones. To which he replied, “It’s just bread!” Well, we decided on a compromise, one week wheat, one week white. In our household, as well as in much of the rest of the world, it’s not just bread.

Bread is food. Bread is sustenance. Bread is life. It is this basic element of our everyday lives that Jesus identifies with in both of these passages: “the bread of God is he who comes down from heaven and gives life to the world” (John 6:33) and “Then he took a loaf of bread, and when he had given thanks, he broke it and gave it to them, saying, “This is my body, which is given for you. Do this in remembrance of me.” (Luke 22:19). Jesus was trying to communicate that the bread of God gives life. A life not identified by the monotonous rhythm of beats and breaths. Rather, it is a life filled with the passionate, divine love that shattered the coffin of sin.

Creating and loving God, You spread a table before us inviting us to partake of Your steadfast love and redeeming grace. We thank You for the gift of the bread of life. Help us to recognize and seek the nourishment only You can provide. As one body united in Christ, help us to walk and sing as brothers and sisters glorifying You in all that we say and do. In Your Son’s Holy name we pray, Amen.