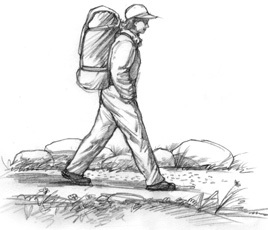 When you till the ground it will no longer yield to you its strength; you will be fugitive and a wanderer on earth.
Genesis 4:12

It was in junior high school, I believe, when I first came in contact with Edward Everett Hale’s novella, A Man Without a Country. You may remember the man is young United States Army Lieutenant Philip Nolan whose friendship with Aaron Burr made him an accomplice when Burr was tried for treason. At the court hearing Nolan denounced his country and stated, “I wish I may never hear again of the United States again.” The judge of the case granted his request by confining him to naval vessels, but never allowing him to set foot on his country’s soil again. Nolan truly became a man without a country. Wouldn’t it be terribly sad never to set foot in one’s hometown, home state or country again?

Cain killed his brother Abel in the field. Omniscient God knew what had happened to Abel, but the Lord asked Cain the whereabouts of his brother. Abel said, “I do not know. Am I my brother’s keeper?” The Lord acknowledged that He heard Abel’s blood crying out from the ground. God said, “And now you are cursed from the ground, which has opened its mouth to receive your brother’s blood from your hand. When you till the ground it will no longer yield to you its strength; you will be a fugitive and a wanderer on earth.” Cain said, “My punishment is greater than I can bear!” Cain was afraid he would be killed, but the Lord was merciful deciding to protect him from that fate.

However, the Lord did not rescind the punishment of Cain forevermore being a fugitive and a wanderer! Like the man without a country, he would never be able to return home … to visit his parents Adam and Eve. As a fugitive he would always be looking over his shoulder to see who might have spotted him … to see others who might be talking behind his back about him being the brother killer. He would from that moment on be a man on the run!

Many in our congregation like I, enjoy traveling within the United States or abroad. We enjoy seeing beautiful and faraway places. After weeks or maybe months of travel, we can experience homesickness. There comes a time when we long to see and want to return to the green, green grass of home. Cain couldn’t ever go home again!

O God, we thank You for our homes and for the opportunity to travel. Keep us ever mindful that You are always with us whether at home, on the road, in the air, or on the sea. In Christ’s name, we pray. Amen.