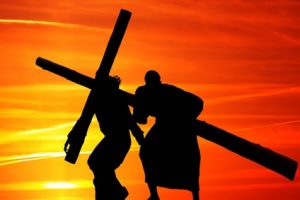 The story of the last days of the life of Jesus is filled with people whom we remember because of their actions. So it is with a man named Simon, from a placed called Cyrene.

John, in his gospel, specifically notes that Jesus carried his cross by himself. Matthew and Mark, however, agree with Luke in mentioning Simon of Cyrene along the trail of suffering up to Golgotha:

As they led him away, they seized a man, Simon of Cyrene, who was coming from the country, and they laid the cross on him, and made him carry it behind Jesus.
Luke 23:26

The gospel writer Mark gives us another detail about this forced “servant on the spot”, telling us that he was a family man:

They compelled a passer-by, who was coming in from the country, to carry his cross; it was Simon of Cyrene, the father of Alexander and Rufus.
Mark 15:21

The mention of this Simon ends there. But what he did has been shared though the ages with those who love our Lord. Simon of Cyrene just happened to be coming into the city as Jesus was being forced down the road to His death on the cross. Jesus had been beaten through the night. He had been tortured and tormented. And as He was being forced along by the mobs and the soldiers, someone named Simon was compelled to help Jesus. And he did. Simon of Cyrene picked up the huge, heavy cross and showed compassion for a short while as he eased our Lord’s burden. And his story has been told to this day.

Jesus told his disciples that they must take up their cross and follow him. Sometimes, we are also invited to take someone else’s cross for a short while, too.

Lord, help me to look around today, paying attention to those who cross my path. Let me see if I can ease someone else’s burden, as I follow my Lord and Savior Jesus, in whose name I pray. Amen.