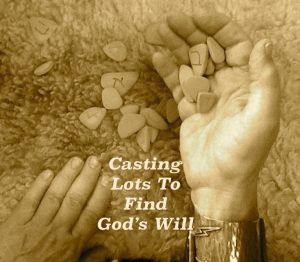 Casting the lot puts an end to disputes and decides between powerful contenders.

Casting the lot was often the means Jews employed to determine God’s will in Biblical times. The evangelist Luke gives us two situations that were determined by casting lots. Lots could be sticks with markings or stones etched with symbols that were then thrown into an encircled area. Perhaps the one closest to the center or the one with the highest value determined upon whom the lot was cast.

Second in the Acts of the Apostles, the evangelist Luke’s second volume, he records the selection of a disciple to fill the place once occupied by Judas, who betrayed Jesus and who completed suicide. The two contenders for this position were Justus and Matthias. Both men were qualified for the position as the disciples had determined that the one to succeed Judas must have been a follower of Jesus from the time of His baptism. The disciples prayed and asked God to show them whom God had chosen to serve as an apostle. The tangible means of determining the person to serve as an apostle was by casting lots. The lot fell on Matthias. (Acts 1:26)

In Proverbs 18:18 we read, “Casting the lot puts an end to disputes and decides between powerful contenders.” Casting lots or tossing a coin are an effective means of settling disputes or making a decision only if the parties agree to accept the outcome. I don’t know about casting lots but I do know about tossing coins! How often have you heard someone or some people try to reset the rules after “the decision” has been made? How about the best two out of three? How about the best three out of five? How about the best four out of seven? The “losing” party is hoping the added tosses will be more favorable.

Yes, casting lots or tossing a coin are good ways to settle disputes and to make decisions provided the parties agree to accept the results. The next time you seek to settle a dispute or make a decision by a coin toss, just make certain you are willing to abide by the outcome. Remember a prayer that God will use this as a means of revealing God’s will is also in order.

O God, help us to be good sports when we lose the coin toss. Help us to accept the outcomes of coin tosses in settling disputes and making decisions. Remind us to pray that Your will be done as we employ this means to reveal what Your will is. In Jesus’ name, we pray. Amen.