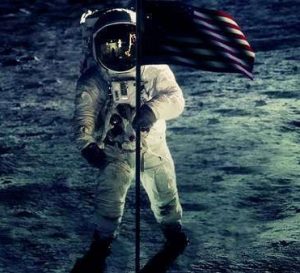 It was fifty years ago this week (July 20) to be exact that the Apollo XI crew of Neil Armstrong, Buzz Aldrin, and Michael Collins landed on the moon. For those a little younger than I am and many who are older than I am, we remember that date and where we were when pictures of that event were shown on television screens. Do you remember where you were and what you were doing? That is one of those happy dates we remember.

Mother, Dad, and I were glued to our television set as we watched Neil Armstrong step onto the moon’s surface and utter those memorable words: “This is one small step for man; one giant leap for mankind.” We watched Buzz Aldrin follow and saw the American flag erected while Michael Collins manned the module.

If either astronaut reflected on this psalm, there is no record. If they did, I wonder did they react differently from hearing/reading it there and here. The Psalmist declared,

When I look at the heavens, the work of your fingers, the moon, and the stars that you have established, what are human being that you are mindful of them, mortals that You care for them?

It must have been awesome to consider that Psalm and where the word “moon” is to replace it with the word, “earth.”

I love this psalm and while I am not a devoted astrologer, I do listen out for special sightings that can inspire us more. I do enjoy gazing at the moon and stars. One minute I am “lost in wonder, love and praise” considering the works of God. The next I am basking in the light of God’s favor because God evidently has a high opinion of humans in spite of the stories we hear of man’s inhumanity to humankind. The Psalmist acknowledges, [God] has made us a little lower than [Himself] and crowned [us] with glory and honor. God has given us dominion over all other creatures.

Creator God, thank You for making the sun, moon, and stars and for calling us to pause and reflect on Your grace and glory. In Jesus’ name, we pray. Amen.