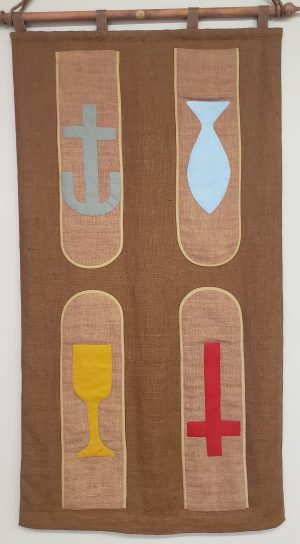 THE SOMBER BROWN COLOR: The difficulty and rigor of early Christianity under persecution; also the monastic tradition.

THE PURPLE ARCHES: The entrances to caves or catacombs, where early Christians met in secret; also the shape of Gothic church windows.

THE ANCHOR CROSS: Security in Christ, as found by the apostles, some of whom were fishermen.

THE FISH: An ancient symbol for the Christian faith, perhaps a secret code mark. Letters of the Greek word for fish can be used as the first letters in the phrase “Jesus Christ God’s Son Savior.”

THE CHALICE: The Lord’s Supper, and thus the earnest and simple fellowship of the early church.

THE UPSIDE-DOWN CROSS: Peter, chief of the apostles, who, in legend, is said to have been crucified upside-down because he thought himself unworthy of a death like his Master’s.

I believe in God the Father Almighty, Maker of heaven and earth,

And in Jesus Christ his only Son our Lord; who was conceived by the Holy Ghost, born of the Virgin Mary, suffered under Pontius Pilate, was crucified, dead, and buried; he descended into hell; the third day he rose again from the dead; he ascended into heaven, and sitteth on the right hand of God the Father Almighty; from thence he shall come to judge the quick and the dead.

I believe in the Holy Ghost; the holy catholic Church; the communion of saints; the forgiveness of sins; the resurrection of the body; and the life everlasting. Amen.

Wonderful God, from the time of the earliest days of the church, we have praised you as Father, Son, and Holy Spirit. As believers today, we join in thanking You for being over us, with us, and in us. We praise and thank You for Your continued protection, redemption, and indwelling presence. Amen.