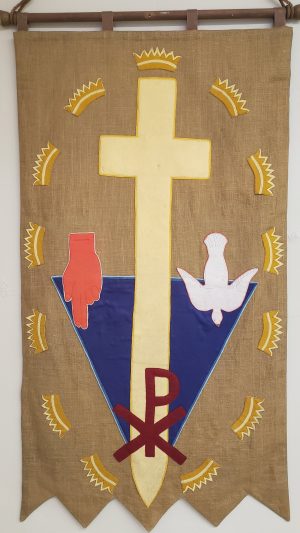 THE CROSS WHICH IS ALSO A SWORD: A symbol for the Emperor Constantine and his successors because he called the ecumenical council which began the process of thinking which resulted in this creed; because he was the first Christian emperor and because he began the tradition of imperial Christianity. The cross is central here because the doctrine of Christ is central in the Creed.

THE BLUE TRIANGLE AND THE THREE SYMBOLS WITH IT: The doctrine of the Trinity formalized in the Nicene Creed.

THE HAND REACHING DOWN: God, the Father.

THE CHI RHO MONOGRAM: Christ – the first two letters of the Greek word for Christ, used by Constantine on shields and helmets of his Army.

THE DOVE: The Holy Spirit.

THE CROWNS: The rule and glory of GOD.

We believe in one God, the Father, the Almighty, maker of heaven and earth, of all that is, seen and unseen.

We believe in one Lord, Jesus Christ, the only Son of God, eternally begotten of the Father, God from God, Light from Light, true God from true God, begotten, not made, of one Being with the Father; through him all things were made. For us and for our salvation he came down from heaven, was incarnate of the Holy Spirit and the Virgin Mary and became truly human. For our sake he was crucified under Pontius Pilate; he suffered death and was buried. On the third day he rose again in accordance with the Scriptures; he ascended into heaven and is seated at the right hand of the Father. He will come again in glory to judge the living and the dead, and his kingdom will have no end.

We believe in the Holy Spirit, the Lord, the giver of life, who proceeds from the Father and the Son, who with the Father and the Son is worshiped and glorified, who has spoken through the prophets. We believe in one holy catholic and apostolic Church. We acknowledge one baptism for the forgiveness of sins. We look for the resurrection of the dead, and the life of the world to come. Amen.

Gracious Lord, we are reminded in creeds, statements of our faith that You are One God, one Lord and we of one faith in Your Son, our Lord. It is in Him that we find our truth and our purpose as faithful people. In reading these creeds and confessions of faith, may we be truly witness to His love to the world. Amen.