Could You Spare a Dollar … For God? 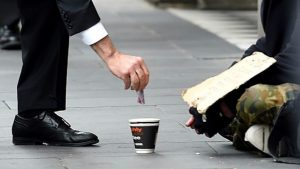 Whoever is kind to the poor lends to the Lord,
and will be repaid in full.

I’ve been travelling the past few days, and that means that I have walked down some city streets where people have been asking for money. (Most recently there was a poor man on the sidewalk outside of Atlanta’s Mary Mac’s Tea Room where I had just gorged myself on fried chicken, mac and cheese, creamed corn, buttered corn bread, and peach cobbler. I had water to drink because I’m trying to watch my calories.) As we rounded the corner on the way back to the car, he asked if we had some change to spare. I gave him a dollar, and so did my son Stewart a couple of steps behind me.

People who panhandle set my mind in motion on a constant ethical dilemma. I know the questions about the sincerity of some requests. I have argued both sides of the responsibility debate. On this one occasion, I was probably hoping that this action would appease some of my guilt for gluttony. But Proverbs takes us away from simply the street corner, and to our care for the truly poor in everyday life.

Whoever is kind to the poor lends to the Lord, and will be repaid in full.

Rather than seeing my next action as a hand-out, what if saw my next encounter with a poor person as an opportunity to “float a loan to Jesus?”

Dear God, in the parable about the sheep and the goats Jesus spoke of how we could minister to Him as we were kind to “the least of these.” Help me to encounter Jesus today and not just as I pray in His name. Amen.