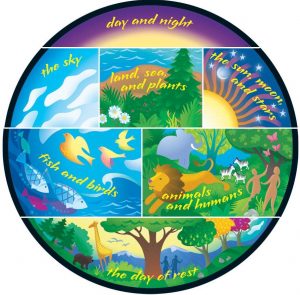 Today I want us to travel down “Memory Lane” to think about how we came to know about different animals. Did you learn about barnyard animals by singing Old McDonald Had a Farm? Did you learn about animals whose original homes were in Africa by visiting a circus or a zoo? The more we learned the more we realized we had to learn. In school we were introduced to microscopes which opened our eyes to a whole new world of plant and animal life we never knew existed. Remember the sense of wonder you experienced when you first became acquainted with amoebas and protozoans? Later, we may have gone to a zoo and discovered that these parks contained more species than just elephants, giraffes and lions. Remember giggling when you first saw that strange creature: the duckbilled platypus? Visits to aquariums and aviaries introduced us to sea life and birds with which we had no familiarity. We marveled as we learned more and more about the creatures that inhabit this earth with us.

The Creation Story reminds us, “Before God created the world. there was nothing at all – except God.”

The children’s story includes the “sound effects” of creation. “God said, “Let there be people on the earth! BLINK! WINK! HICCUP! There were people on the earth. God saw that the people were very good.” In six days, God went from being alone to overseeing a world populated with sea animals, birds, animals with fur, bugs, reptiles and God’s greatest creation, people made in God’s image, male and female.

Whether gazing at the skies above us, the earth beneath us, and the host of creatures all around us, our response can be nothing less than praise, wonder and thanksgiving. Take a good look outside and in front of the mirror today. Marvel at what you see!

Creator God, thank You for this big, beautiful world that You made and for making each one of us in Your own image. In Jesus’ name, we pray. Amen.