Crispus: One Baptized By Paul 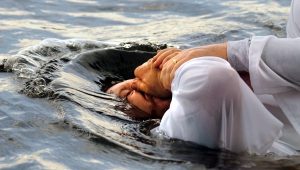 Crispus, the official of the synagogue, became a believer in the Lord, together with all of his household; and many of the Corinthians who heard Paul became believers and were baptized.
Acts 18:8

It has been said that when Martin Luther despaired about his life and his failures, he was encouraged by these words, “Remember, you have been baptized.” While the Great Reformer would have liked to walk closer to the Lord, those words reminded him that he had been baptized and that he had died and been raised through our Lord Jesus Christ. Like many he could not remember his baptism, but he remembered what he had been told about it.

Like a number of Christians, I was baptized as a believer. I made my Profession of Faith in Jesus Christ as my Lord and Savior on a Sunday night in November of 1962 at Tabernacle Baptist Church in Union, South Carolina. I was baptized on Sunday morning December 30, 1962, by the Rev. Mr. Marvin Hembree. Usually baptisms were done on Sunday evenings, but our pastor had resigned and this was his last service he officiated at the church. I remember going into the baptismal pool and being immersed. I remember my baptism!