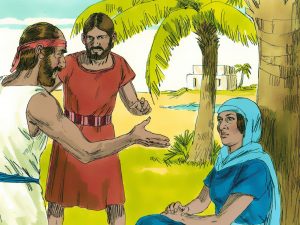 Her name was Deborah. The story about her fills two whole chapters in the Bible. The editors of the Spark Story Bible tell it to children in less than two pages of text:

God’s people had been captured by an enemy. They prayed to God, “Please help us get our land and freedom back!” God listened and sent them a woman named Deborah to help them.

Deborah was a judge and was very wise and faithful to God. She gave people messages from God and helped them talk out their arguments. Every day, Deborah sat under a palm tree. Men and women who had problems came to her for help.

One day, God gave Deborah an important message – a message that would help free the people of Israel! Deborah gave God’s message to a man named Barak. She told him “God said, ‘Take 10,000 men and go to Mount Tabor. God will help you defeat the king’s army and the Israelites will be free!”

Deborah, who was as brave as she was wise, agreed to go. She knew that God would be with her every step along the way. Barak and Deborah took 10, 000 men to Mount Tabor. There was an awful battle! Yelling and fighting went on – the noise was loud and terrible! But God was always with Deborah and the Israelites, protecting them and keeping them safe. It was a hard fight, but finally, Barak and the Israelites won!

God helped them defeat the king’s army, and there was peace for 40 years.

It’s good at any age for us to get to know Deborah, and how God uses faithful people to do God’s will and work.

God, will I live so that people might tell stories about me, using words like wise, brave, and faithful? Put me on that path as I walk today with my Lord and Savior Jesus, in whose name I pray. Amen.