Destined to Be an Heirloom 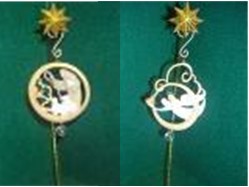 The ornament of the shepherd tending his flock declares, “Now there were in the same country shepherds living out in the fields, keeping watch over their flock.” Luke 2:8. This ornament was purchased at Lighthouse Christian Bookstore in December 2008. The ornament is destined to be an heirloom for my son Ariston.

Our tree is adorned with many special ornaments that show what special events are happening in the children’s lives. Two years ago, Ariston appeared as a shepherd in the Live Nativity. Our quest to find a shepherd ornament was finally completed after two years of searching. Now this ornament will remind us of this special tradition for years to come.

The ornament of a flying angel with the verse saying, “Glory to God in the highest, and on earth peace and goodwill toward men.” Luke 2:14

This ornament was purchased at Lighthouse Christian Bookstore in December 2008. The ornament is destined to be an heirloom for my daughter, Aurora.

Each year we pick a special ornament to add to our family tree. For the past two years, Aurora has been an angel in the Live Nativity, so this ornament signifies that special tradition.

That night some shepherds were in the fields outside the village, guarding their flocks of sheep.

In the sixth month of Elizabeth’s pregnancy, God sent the angel Gabriel to Nazareth, a village in Galilee, to a virgin named Mary. She was engaged to be married to a man named Joseph, a descendant of King David. Gabriel appeared to her and said, “Greetings, favored woman! The Lord is with you!” Confused and disturbed, Mary tried to think what the angel would mean. “Don’t be frightened, Mary,” the angel told her, “for God has decided to bless you! You will become pregnant and have a son, and you are to name him Jesus. He will be very great and will be called the Son of the Most High. And the Lord God will give him the throne of his ancestor David. And he will reign over Israel forever; his Kingdom will never end.

Our Faithful Shepherd, there you are, always tending us, leading and guiding us along life’s various paths. Help us to follow you, to remember that you are the ever present Shepherd in our lives. As we experience various trials and tribulations, keep our focus ever upward. In your holy name, Amen.