Did You Know Jesus’ Parents Were Poor? 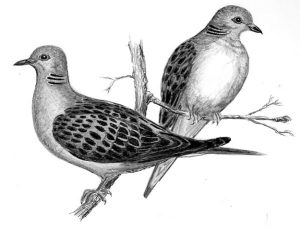 When the time came for their purification according to the Law of Moses, they brought Him up to Jerusalem to present Him to the Lord (as it is written in the law of the Lord. Every firstborn male shall be designated as holy to the Lord.”), and they offered a sacrifice according to what is stated in the law of the Lord, “a pair of turtledoves or two young pigeons.
Luke 2:22-24

When a child is born in a hospital, for an ever so brief moment he or she is just like all the other babies in the nursery. All the rolling cribs in the nursery look alike with their clear plexiglass windshields. All the babies are snugly wrapped in the same type blankets although their colors and designs may differ. Where everyone is treated equally, the only difference found is in the name in the cardholder. Baby Rockefeller could be next to Baby Smith. Baby Vanderbilt could be next to Baby Jones. When the parents and child leave the hospital, the Smith and Jones families may drive away in a Fiat or Mini Cooper. The Rockefellers and Vanderbilts may drive away in a Range Rover or be chauffeured home in a Rolls Royce. It is then that we see the differences in the babies and their families.

The lyrics of an old hymn, Thou Didst Leave Thy Throne, show that in the Incarnation Jesus came from wealth in heaven and embraced poverty on earth. Listen: Thou didst leave Thy throne and Thy kingly crown When Thou camest to earth for me; but in Bethlehem’s home there was found no room For Thy holy nativity. Heaven’s arches rang when the angels sang, Proclaiming Thy royal degree; But in lowly birth didst Thou come to earth, And in great humility.” Earlier in Luke’s Gospel we may have assumed that Mary and Joseph could have afforded lodging, but there was none to be found at any price in Bethlehem. The expectant couple ended up in a stable not because they did not have some money to pay for accommodations, but because all the guest rooms were taken and a stable alone could provide them with shelter.

So what was the law of Moses concerning sacrifices made after the birth of a child? In Leviticus 12:6 we read, “When the days of her purification are completed, whether for a son or for a daughter, she shall bring to the priest at the entrance of the tent of meeting a lamb in its first year for a burnt offering, and a pigeon or a turtledove for a sin offering.” Mary and Joseph offered two turtledoves. In Leviticus 12:8 we read, “If she cannot afford a sheep, she shall take two turtledoves or two pigeons, one for burnt offering and one for a sin offering, and the priest shall make atonement on her behalf, and she shall be clean.” Mary and Joseph were obedient to the law, but their gift reveals that they were people of little means. They could not offer a sheep, but they would give their best of what they had to God and in nurturing their son Jesus,

Dear God, we may be of different socio-economic levels, but what You ask of us is to be faithful and obedient in our giving and sharing. Help us to live that way bringing honor and glory to You. In Christ’s name, we pray. Amen.