Ehud: A Left-Handed Leader for God 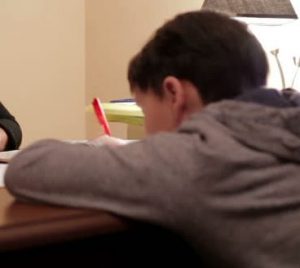 But when the Israelites cried out to the Lord. The Lord raised up for them a deliverer, Ehud son of Gera, the Benjaminite, a left-handed man.
Judges 3:15

When I was in the fourth grade a new student joined our class. His name was Jack and we became friends. Though surely within that time of schooling there were other students who were left-handed, somehow I never took note. Our teacher was Mrs. Estes and I remember how she worked with Jack on writing. Rather than having his left hand curl all the way around so that his fingers were turned inward, she tried to get him to open up his hand more and readjust his paper. Funny thing: I don’t recall how successful this all was, but I do remember the extra attention Mrs. Estes gave Jack. I don’t believe that Mrs. Estes ever tried to get Jack to become right-handed, she just wanted to help him to write better and easier.

It sounds like a broken record (repeating over and over): “The Israelites again did what was evil in the sight of the Lord.” God strengthened their enemy King Eglon of Moab. He defeated the Israelites and they became prisoners of servitude for eighteen years. The Israelites cried out for a deliverer. The Lord raised up Ehud, a left-handed man. The Israelites sent tribute to Eglon via Ehud. Ehud made a sword and fastened it to his right thigh. Once the tribute was presented to Eglon , Ehud told him he had a special message for him. The king dismissed all of his attendants and he and Ehud were alone. Ehud told King Eglon he had a message for the king from God. Ehud reached with his left hand for the sword strapped to his right thigh and thrust it into the king’s abdomen. Ehud left as the king was dying and locked the doors, giving him time to escape. Delivering the Israelites from their oppressors was set in motion by a left-handed man doing God’s will.

O God, we have been made in Your image and we are left-handed, right-handed and ambidextrous. You can use us, one and all. Help us to seek Your will and help us to be Your faithful and obedient servants. In Christ’s name, we pray. Amen.