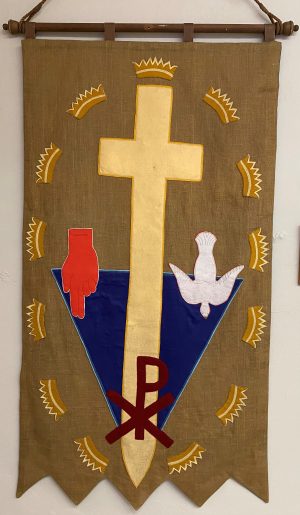 Names of Christ – Who Do you Say That I am?

“Now the birth of Jesus the Messiah took place in this way. When his mother Mary had been engaged to Joseph, but before they lived together, she was found to be with child from the Holy Spirit. Her husband Joseph, being a righteous man and unwilling to expose her to public disgrace, planned to dismiss her quietly. But just when he had resolved to do this, an angel of the Lord appeared to him in a dream and said, ‘Joseph, son of David, do not be afraid to take Mary as your wife, for the child conceived in her is from the Holy Spirit. She will bear a son, and you are to name him Jesus, for he will save his people from their sins.’ All this took place to fulfil what had been spoken by the Lord through the prophet: ‘Look, the virgin shall conceive and bear a son, and they shall name him Emmanuel’, which means, ‘God is with us.’”

There is one name for Jesus that we say over and over, especially at Christmas time – Emmanuel – God with us. That powerful name of connecting the true conscious choice by God to enter human form as a tiny infant and live among us. It’s a title that connects in word what the Nicene Creed (one of 12 Creeds and Confessions which the PC (USA) looks to state our faith and bear witness to God’s grace in Jesus Christ at particular points in history.) which states, “We believe in one Lord, Jesus Christ, the only Son of God, eternally begotten of the Father, God from God, Light from Light, true God from true God, begotten, not made, of one Being with the Father; through him all things were made.” As one our oldest and most widely adoptive creed to Western Christianity, along with the Apostles Creed, the church since the time of Constantine attempts to put to words our believe in Jesus Christ as God’s Son since the beginning of time. God with us was a planned, one-time event which God entered human form, not as other, deemed heretical statements gaining traction at the time such as Jesus being human and God entered this human man. To deny and clarify these beliefs that indeed, Jesus Christ the Son was equal to and in equal relationship to God and the Holy Spirit (what we also refer to as the Trinity) the early church leaders developed and polished this creed in Nicaea starting in 325 AD.  Within the Nicene Creed and the word Emmanuel, the uniqueness of relationship between these two divine beings as of being from the same substance or essence – highlighted part of the Creed above. The early church had to create a new word in their language, Latin, to define this new, separate, and unique relationship found only within the trinity – homoousious -being of one substance as the Father.

This was an important and central understanding to the early church and even to us today. To call Jesus Emmanuel changes everything. God’s relationship with each of us and with the world.

Gracious Lord, we pray we may be continually led and guided by Your Son, Emmanuel, His life illuminated in scripture and in the creeds and confessions of our church. What we seek to be faithful and strong in our witness of one Lord, Jesus Christ – Emmanuel. Amen.