Esther and the Feast of Purim 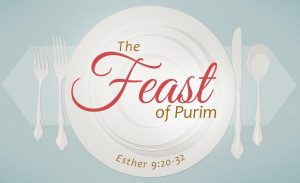 The command of Queen Esther fixed these practices of Purim, and it was recorded in writing.
Esther 9:32

Continuing with the story of Hadassah/Esther, we learn that word needed to be sent to the 127 provinces of King Ahasuerus rescinding his previous order to kill the Jews. Letters were sent out to allow the Jews in every city to assemble and defend their lives, to destroy, to kill, to annihilate any armed force of people or province that might attack them. Haman and his ten sons would be hanged on the gallows Haman had designed for the Jew, Mordecai. Haman’s house was given to Queen Esther. The Jews struck down their enemies, but they did not take the plunder.

Mordecai … sent letters to all the Jews who were in all the provinces of King Ahasuerus, both near and far, enjoining them that they should keep the fourteenth day of the month of Adar and also the fifteenth day of the same month , year by year, as the days on which the Jews gained a relief from their enemies and as the month that had been turned from sorrow into gladness and from mourning into a holiday; that they should make them days of feasting and gladness, days for sending gifts of food to one another and presents to the poor. So the Jews adopted a custom what they had begun to do.
Esther 9:20-23

Letters were sent wishing peace and security to all the Jews … and giving orders that these days of Purim should be observed at their appointed seasons, as the Jew Mordecai and Queen Esther enjoined on the Jews, just as they had laid down for themselves and for their descendants regulations concerning the fasts and their lamentations.
Esther 9:30-31

FYI: Purim begins on Wednesday, February 28 and ends on March 1, 2018. In the synagogue the book of Esther is read and whenever Haman is mentioned the worshipers use noisemakers to drown out his name. Haman is representative of every anti-Semite in every land where Jews are oppressed. Remembering Jews’ survival against all odds, Purim is a thankful and joyous occasion. Hamantaschen, (Haman’s pockets) are triangular cookies with fruit fillings served and shared on the holy day.

Blessed Lord, while we may not wield political or royal power, as did Queen Esther, keep us mindful that we may participate in saving people … by sharing our bread, by standing up for those who are oppressed, by speaking words of encouragement, and by giving of our wealth to assist with educational and medical missions. In Christ’s name, we pray. Amen.