Eternal Father Strong to Save ~ Hymn 8 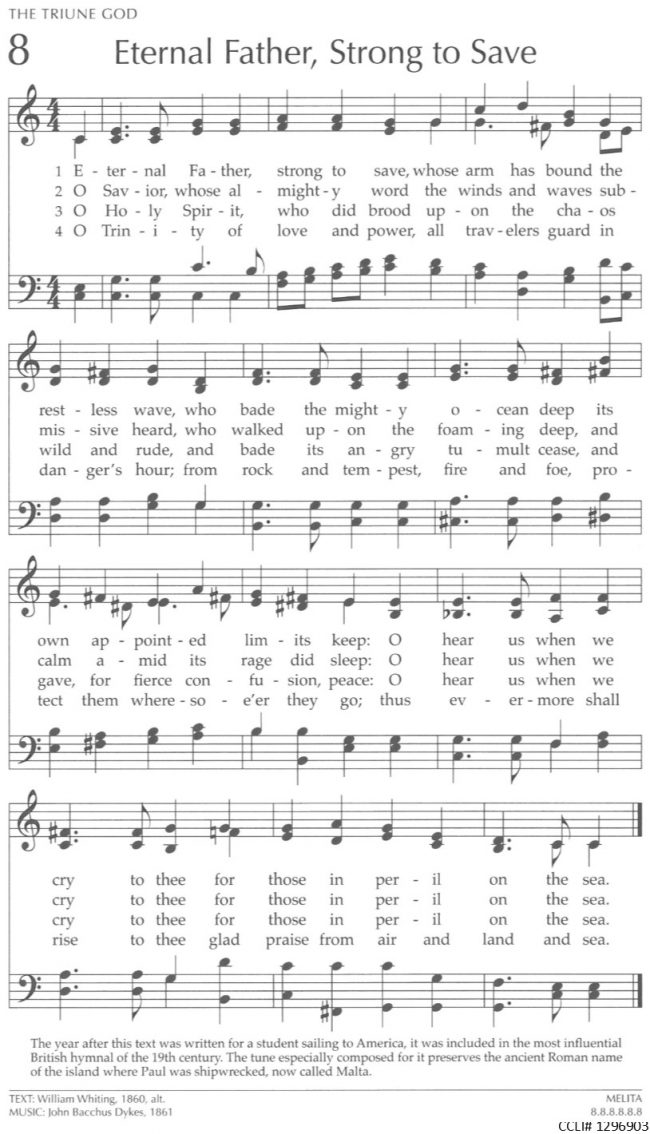 But when he (Peter) noticed the strong wind, he became frightened and beginning to sink, he cried out “Lord save me!

This New Testament story was among my favorites as a child. Only a young person of faith would see a creek or pond as a means of reenacting this story which took place on the Sea of Galilee, well known for how quickly peaceful waters could change into a frightening and turbulent lake.

When I rewrote and recast this scene, Alan was the faithful and courageous disciple. I stepped out of the imaginary boat and placed one foot on the creek or pond. Then I imagined the foreboding skies, the powerful lightning bolts, the crashes of thunder, and being battered from above with torrents of rain and from crests of water pouring over the sides of the boat. And I took another step and then another. I reached out my hand and Jesus grabbed it and raised me up from what was quickly becoming a watery graveyard. I was saved! I was rescued! And together, Jesus and I joined the others in the boat. How many times had I reenacted that play? Time after time the ending never changed, and I was just as doubtful as Peter.

Eternal Father, strong to save, whose arm has bound the restless wave, who bade the mighty ocean deep, its own appointed limits keep: O hear us when we cry to thee for those in peril on the sea.

Creator God, protect those who fly in turbulent skies, who traverse bumpy roads, and who sail on storm tossed seas. Hold them in the palm of Your hand and grant them peace. In Christ’s name we pray. Amen.