Even Joseph Made Mistakes, Big Ones 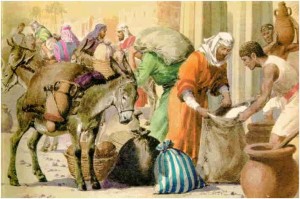 “Joseph recognized his brothers instantly, but he pretended to be a stranger and spoke harshly to them. “Where are you from?” he demanded. “From the land of Canaan,” they replied. “We have come to buy food.” Although Joseph recognized his brothers, they didn’t recognize him. And he remembered the dreams he’d had about them many years before. He said to them, “You are spies! You have come to see how vulnerable our land has become. Genesis 42:7-9

This is not Joseph’s best moment. It brings me great peace when I read stories in the Bible that show that even the great people chosen by God Himself were human and made mistakes. Gigantic mistakes! Every word in the Bible is to be used for a teachable moment. God knows what He is doing and He didn’t put this story of Joseph’s struggles for us to read for no reason at all. We can learn from these stories. Until now we have seen Joseph shine even in the direst of situations. He was unjustly sold into slavery and was blessed then thrown into jail for a long period of time and even in those moments he still let God lead him. Now we see Joseph as a person we can relate to. Finally, the people responsible for all his trials and tribulations are right in front of him. He can finally exact his revenge on them. In Genesis 42 he does just that.

Of course, they didn’t know that Joseph understood them, for he had been speaking to them through an interpreter. Now he turned away from them and began to weep. When he regained his composure, he spoke to them again. Then he chose Simeon from among them and had him tied up right before their eyes. Joseph then ordered his servants to fill the men’s sacks with grain, but he also gave secret instructions to return each brother’s payment at the top if his sack. He also gave them supplies for their journey home. So the brothers loaded their donkeys with the grain and headed for home. But when they stopped for the night and one of them opened his sack to get grain for his donkey, he found his money in the top of his sack. “Look! He exclaimed to his brothers.” My money has been returned; it is here in my sack!” Then their hearts sank. Genesis 42:23-28

I think when we see ugliness on paper and have an opportunity to read it and pray on it we see how wrong it is. However, when we are in the heat of anger and unforgivness, our reactions seem justified. We see in these verses that ugliness is never justified no matter how we have been treated.

Let’s use these verses to see that we should never repay evil with evil. It solves nothing and only continues the cycle of hurt.

Dear Jesus, help us not to repay evil with evil and allow You to change and soften our hearts to Your will and not our own. In Your Name We Pray, Amen.