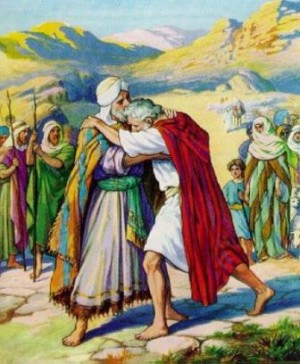 Now Jacob looked up and saw Esau coming, and four hundred men with him. So he divided the children among Leah and Rachel and the two maids. He put the maids with their children in front, then Leah with her children, and Rachel and Joseph last of all. He himself went on ahead of them, bowing himself to the ground seven times, until he came near his brother.

But Esau ran to meet him, and embraced him, and fell on his neck and kissed him, and they wept. When Esau looked up and saw the women and children, he said, “Who are these with you?” Jacob said, “The children whom God has graciously given your servant.” Then the maids drew near, they and their children, and bowed down; Leah likewise and her children drew near and bowed down; and finally Joseph and Rachel drew near, and they bowed down. Esau said, “What do you mean by all this company that I met?” Jacob answered, “To find favor with my lord.” But Esau said, “I have enough, my brother; keep what you have for yourself.” Jacob said, “No, please; if I find favor with you, then accept my present from my hand; for truly to see your face is like seeing the face of God—since you have received me with such favor. Please accept my gift that is brought to you, because God has dealt graciously with me, and because I have everything I want.” So he urged him, and he took it. Genesis 33:1-11 (NRSV)

The story of Jacob and Esau might be viewed as a typical sibling story, because it included some typical siblings. These two brothers were different, as siblings sometimes are. These two brothers had shared their moments of friendship and family, and yet their past also included some real tension. When they had last spoken, Esau accused Jacob of stealing Esau’s birthright, and the distance that Jacob had put between them was a nice security zone.

Now the time had come for Jacob to face his brother and his fears. As this particular portion of the story unfolds, Jacob heads out to face his brother, who was quickly advancing with 400 men. And Jacob, who had again divided what belonged to him into groups (maids and their children first, followed by wives and their children, least favorite batch first), took the lead.

Jacob thought he knew what was coming his way, and he stepped to the front to face his fears. And what happened? Rather than the stinging sword of his brother and the troops, he was swamped with the graceful hugs and tears of Esau. Jacob faced his fears, and he got something he had never expected; forgiveness.

Sometimes we are afraid of getting what is coming. We aren’t anxious to receive what we deserve for the ways we often live our lives. And yet sometimes, when we listen to God’s call, and step to the front to face our fears, we can be surprised by joy. Is it worth the risk to take the step?

God, help me to learn to face my fears, rather than hide from them. Give me the courage to step to the front, and to trust that you’re truth and love will prevail. In Jesus’ name I pray. Amen.