Faith in the Shadows 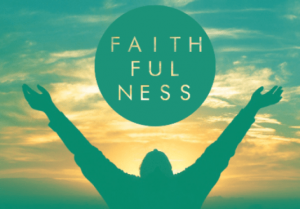 When it was noon, darkness came over the whole land until three in the afternoon. At three o’clock Jesus cried out with a loud voice, “Eloi, Eloi, lema sabachthani?” which means, “My God, my God, why have you forsaken me?” When some of the bystanders heard it, they said, “Listen, he is calling for Elijah.” And someone ran, filled a sponge with sour wine, put it on a stick, and gave it to him to drink, saying, “Wait, let us see whether Elijah will come to take him down.” Then Jesus gave a loud cry and breathed his last. And the curtain of the temple was torn in two, from top to bottom. Now when the centurion, who stood facing him, saw that in this way he breathed his last, he said, “Truly this man was God’s Son!”

There were also women looking on from a distance; among them were Mary Magdalene, and Mary the mother of James the younger and of Joses, and Salome. These used to follow him and provided for him when he was in Galilee; and there were many other women who had come up with him to Jerusalem.

When evening had come, and since it was the day of Preparation, that is, the day before the sabbath, Joseph of Arimathea, a respected member of the council, who was also himself waiting expectantly for the kingdom of God, went boldly to Pilate and asked for the body of Jesus. Then Pilate wondered if he were already dead; and summoning the centurion, he asked him whether he had been dead for some time. When he learned from the centurion that he was dead, he granted the body to Joseph. Then Joseph bought a linen cloth, and taking down the body, wrapped it in the linen cloth, and laid it in a tomb that had been hewn out of the rock. He then rolled a stone against the door of the tomb. Mary Magdalene and Mary the mother of Joses saw where the body was laid.
Mark 15:33-47

When Mark records the story of the death of Jesus, we see some scared and faithful friends. The disciples (and a naked boy) run away. (see Mark 14:52) But Peter makes his way to courtyard near when Jesus is on trial. And just following His death, Joseph of Arimathea makes a bold move to go and request the body of Jesus, then burying our Lord in what may have been Joseph’s own tomb. And, in the shadows, we see some wonderfully faithful women. Mary Magdalene, Mary the mother of James and Joses, and Salome, watch the crucifixion from a distance and even make their way to the garden to see where the body of Jesus is entombed.

And they are remembered forever for their faithfulness.

Sometimes our faith is lived out center stage. And sometimes, we faithfully follow in the shadows. It’s all about the faithful part.

God, help me to stay faithful to You wherever I find myself today. Give me the opportunity and the ability to faithfully follow as Christ’s disciple. Amen.