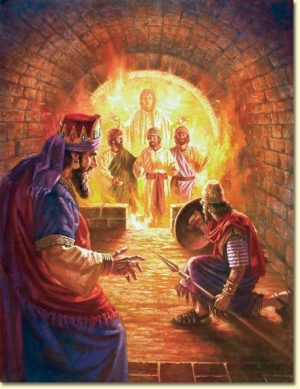 How hot is hot? The last double digits and a triple digit reading on the thermometer means it is hot. Someone with a 104’ temperature is hot. The suggested temperature range for hot tubs is 102-104’F. Depending how sensitive one is to heart that may be hot. When the geyser Old Faithful erupts the water temperature at the vent has been measured to be 204’F. The boilng point of water is 212’F and that is hot. A 500’ oven is hot and foods must be watched very carefully or else they will burn. I think a fiery furnace heated seven times hotter than normal is bound to be hot and hotter than we can imagine.

King Nebuchadnezzar was a power hungry and vain man. He commissioned a huge golden statue of himself to be made and displayed. He then commanded all his subjects to bow in worship to this god. Three of his subjects, who were Israelites, Shadrach, Meshach, and Abednego, refused to obey the king for they knew that the God of Israel was the one alone that they should worship. Nebuchadnezzar was furious and in his rage, he ordered these men to be tied up and thrown into a fiery furnace. Smoke was ascending through the chimneys. Flames were leaping inside the furnace chamber. As the king peered through the port hole he was surprised.

“’I thought we threw three men in there,’ he shouted. ‘But I see four men walking around n there, and they aren’t even tied up! They’re fine! What’s going on?’ The extra man in the furnace was an angel sent by God to protect three from the fire. The king flung open the door of the hot, fiery furnace and called, ‘Shadrach, Meshach. and Abednego, come out right now!’”

As Shadrach, Meshach and Abednego emerged for the furnace, everyone was astounded that they had sustained no injuries. They were untouched by the flames of the fiery furnace.

We must admit that it took great courage for Shadrach, Meshach and Abednego to stand fir with their belief in the One God and to risk being killed by an awful death in a fiery furnace. History records the death of saints and martyrs, who suffered excruciating pain and death to remain true to their faith. In this instance God intervened by sending an angel to spare the lives of these three faithful men.

While we may never face a fiery furnace, we may still suffer for our faith. When we face such trials, may God give us strength to stand fast, to obey God’s commandments and to serve and worship only God.

Ever Faithful God, we confess that we have not always obeyed Your commandments. Forgive us of our sins. Give us courage and strength when we are tested so that we may be found faithful. In Christ’s name, we pray. Amen.