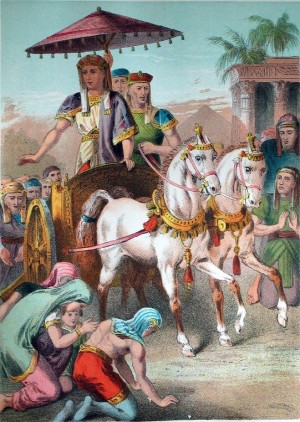 41 After two whole years, Pharaoh dreamed that (no one in Egypt could interpret)… 9 Then the chief cupbearer said to Pharaoh, “I remember my faults today. 10 Once Pharaoh was angry with his servants, and put me and the chief baker in custody in the house of the captain of the guard…. 12 A young Hebrew was there with us, a servant of the captain of the guard. When we told him, he interpreted our dreams to us, giving an interpretation to each according to his dream. … 14 Then Pharaoh sent for Joseph, and he was hurriedly brought out of the dungeon. When he had shaved himself and changed his clothes, he came in before Pharaoh. 15 And Pharaoh said to Joseph, “I have had a dream, and there is no one who can interpret it. I have heard it said of you that when you hear a dream you can interpret it.” 16 Joseph answered Pharaoh, “It is not I; God will give Pharaoh a favorable answer.” 17 Then Pharaoh said to Joseph, “In my dream I was standing on the banks of the Nile; 18 and seven cows, fat and sleek, came up out of the Nile and fed in the reed grass. 19 Then seven other cows came up after them, poor, very ugly, and thin. Never had I seen such ugly ones in all the land of Egypt. 20 The thin and ugly cows ate up the first seven fat cows, 21 but when they had eaten them no one would have known that they had done so, for they were still as ugly as before. Then I awoke. 22 I fell asleep a second time[a] and I saw in my dream seven ears of grain, full and good, growing on one stalk, 23 and seven ears, withered, thin, and blighted by the east wind, sprouting after them; 24 and the thin ears swallowed up the seven good ears. But when I told it to the magicians, there was no one who could explain it to me.” 25 Then Joseph said to Pharaoh, “Pharaoh’s dreams are one and the same; God has revealed to Pharaoh what he is about to do. 26 The seven good cows are seven years, and the seven good ears are seven years; the dreams are one. 27 The seven lean and ugly cows that came up after them are seven years, as are the seven empty ears blighted by the east wind. They are seven years of famine. 28 It is as I told Pharaoh; God has shown to Pharaoh what he is about to do. 29 There will come seven years of great plenty throughout all the land of Egypt. 30 After them there will arise seven years of famine, and all the plenty will be forgotten in the land of Egypt; the famine will consume the land. 31 The plenty will no longer be known in the land because of the famine that will follow, for it will be very grievous. 32 And the doubling of Pharaoh’s dream means that the thing is fixed by God, and God will shortly bring it about. 33 Now therefore let Pharaoh select a man who is discerning and wise, and set him over the land of Egypt. 34 Let Pharaoh proceed to appoint overseers over the land, and take one-fifth of the produce of the land of Egypt during the seven plenteous years. 35 Let them gather all the food of these good years that are coming, and lay up grain under the authority of Pharaoh for food in the cities, and let them keep it. 36 That food shall be a reserve for the land against the seven years of famine that are to befall the land of Egypt, so that the land may not perish through the famine.” 37 The proposal pleased Pharaoh and all his servants. 38 Pharaoh said to his servants, “Can we find anyone else like this—one in whom is the spirit of God?” 39 So Pharaoh said to Joseph, “Since God has shown you all this, there is no one so discerning and wise as you. 40 You shall be over my house, and all my people shall order themselves as you command; only with regard to the throne will I be greater than you.” 41 And Pharaoh said to Joseph, “See, I have set you over all the land of Egypt.” 42 Removing his signet ring from his hand, Pharaoh put it on Joseph’s hand; he arrayed him in garments of fine linen, and put a gold chain around his neck. 43 He had him ride in the chariot of his second-in-command; and they cried out in front of him, “Bow the knee!”[b] Thus he set him over all the land of Egypt. 44 Moreover Pharaoh said to Joseph, “I am Pharaoh, and without your consent no one shall lift up hand or foot in all the land of Egypt.”…. Thus Joseph gained authority over the land of Egypt. Genesis 41:1-44

The story of Joseph unfolds like many life stories. Days turn into weeks. Weeks turn into months. Months turn into years. All along we seem to wait for something good to happen. It had been a long time since Joseph had been thrown into the pit by his jealous brothers. And every step along the way, as Joseph did what he thought was right and honorable, things seemed to get worse. He had resisted the advances of his master’s wife, and he was falsely accused and jailed. He had assisted the fellow prisoners and interpreted their dreams, and when released they forget about him. But now, he finally got a break. And what a break it was. Joseph was made second in command to the Pharaoh himself. (And greater things were coming!)

The story of Joseph is a great one to read over time in life, and to read many times in life. Just when it seems that life is truly unfair, some surprising thing happens, and we finally get a break.

Help me, Lord, to remain faithful in my daily walk, even when things don’t seem to be working out right. Remind me of your constant and long-term love and care, as I pray in Jesus’ name. Amen.