Finding God in the Perilous Journeys of Our Lives! 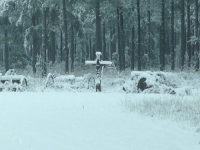 “Since they had been without food for a long time, Paul then stood up among them and said, ‘Men you should have listened to me and not have set sail from Crete and thereby avoided this damage and loss. I urge you now to keep up your courage, for there will be no loss of life among you, but only of the ship.’” Acts 27:21-22 (NRSV)

On Friday, March 13, 1993, I had left my parent’s home in Thomasville, North Carolina around eight p.m. and was driving back to Virginia where I served as pastor of Pearisburg Presbyterian Church. I had attended the funeral for my grandfather in Union, SC, on Thursday. I was driving up Interstate 77 near Fancy Gap, Virginia, and a blizzard was coming through. On the ascent up Fancy Gap Mountain, I hit a patch of black ice and lost control of my Jeep Cherokee.

Those of you familiar with that beautiful, scenic drive during the day know that there are embankments that go up and those that go down. Fortunately, as I was trying to regain control of my vehicle, I did not collide with other travelers on the road. Fortunately, as my SUV veered to the right of the road, I ran up an embankment rather than down one. Fortunately, my seat belt was fastened when the vehicle went up the embankment before crashing down on the driver’s side. Fortunately, while badly shaken, I seemingly had only minor injuries and was able to crawl out the hatchback. Fortunately, some Good Samaritans stopped by to inquire about me before a state trooper arrived to assist and contact a towing company. Fortunately, I was towed to a nearby motel where I obtained lodging for a couple of days to wait out the blizzard. You’ll notice I wrote “Fortunately,” but I really should have written, “Blessedly!”

The blizzard came through and the area lost power. There was no heat. There was no food service. I was able to use the phone to inform my parents what had happened and to assure them that I was safe and had shelter. The snowstorm pounded the area and by Sunday morning there was only an occasional flurry. Dad had said that he would come and get me and I discouraged him from doing so. In the morning light, the Jeep looked “totaled,” but the adjuster determined with repairs it would be as good as new.

Late on Sunday afternoon as I looked out the window, a blue Oldsmobile 98 crested the hill and was driven to the front door of the motel. Inside it were my parents coming to rescue me. I was so glad to see them! Through this perilous journey I was kept safe and protected by God. My Dad was like a Knight in shining armor and at his side was his Fair Lady, my mother. I was overwhelmed and overjoyed to see them and to be reunited with them following this perilous journey. God was there then as God is now … by my side. I cling to God’s promise “I will never fail you nor forsake you!” I have clung to that promise time and time again. Thanks be to God!

O God, our help in ages past, our hope for years to come, our shelter from the stormy blast, and our eternal home. We thank You for protecting us in all the perilous journeys of our lives and for Your precious promise: “I will never fail you nor forsake you.” In Christ’s name, we pray. Amen.