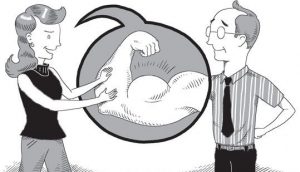 He and Lumpy were two of Wally’s best friends. He often came into Wally and his younger brother Theodore’s room, messing up Theodore’s hair, scattering his homework or test papers around the room or devising other ways to be a pest to the brothers. Whenever he was greeted at the door by Wally and Theodore’s parents, Ward and June, he immediately poured on the charm … being overly polite … and employing flattery to gain favor with The Cleavers. His name was Eddie Haskell, actor Ken Osmond, and the television show was Leave It To Beaver.

A script writer gave Ken the words to say, but Ken brought Eddie to life. Having seen previous episodes, you knew just what to expect from Eddie. He would compliment Mrs. Cleaver on her dress or her hairstyle and while there might be some truth to his comments, the way he said it you just knew he was making the compliment to get on Mrs. Cleaver’s good side. He would also seek to impress Mr. Cleaver by complimenting him about the lawn or his most recent golf score. Eddie was always trying to win brownie points with Wally’s parents and hoping that they would see him as he appeared and not the schmoozer he actually was. On occasion the Cleavers would not let him get away with the flattery and at other times they just waited knowing that sooner or later his words would catch up with him.

If you can’t say something nice that you also sincerely believe or think, then just be quiet. If you flatter someone to gain favor then you are being dishonest with the one you are complimenting and yourself. We can indeed see how a flattering mouth works ruin.