For All the Faithful Women ~ Hymn 324 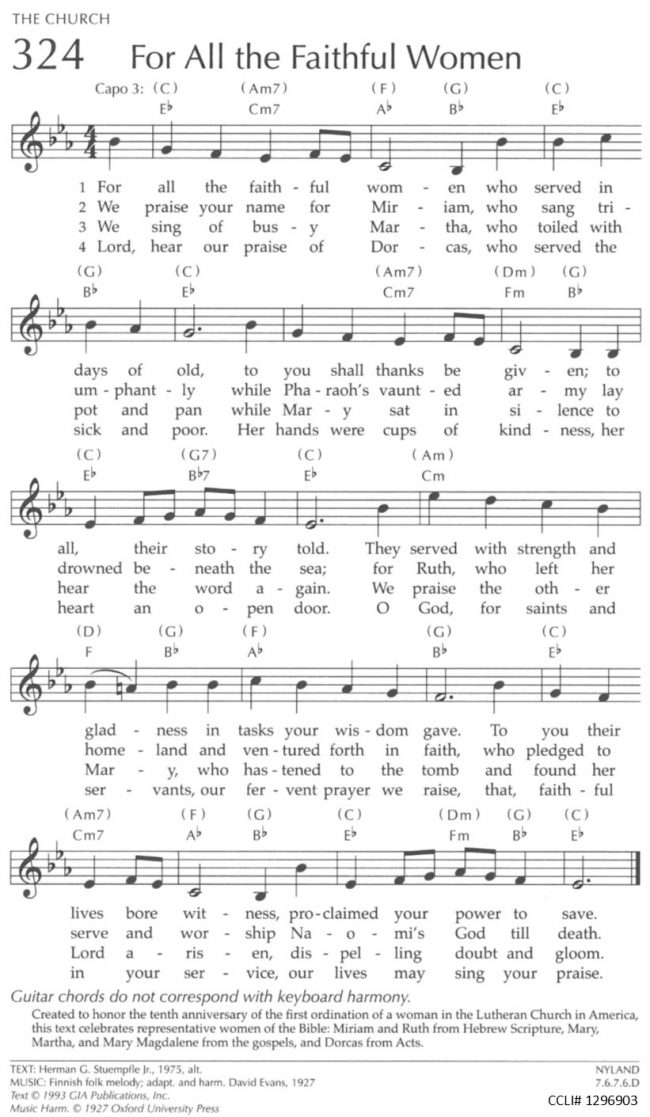 But Ruth said, “…where you go, I will go; where you lodge, I will lodge, your people shall be my people and your God my God.”

“For All the Faithful Women celebrates representative women of the Bible: Miriam and Ruth from Hebrew scripture, Mary, Martha, and Mary Magdalene from the gospels, and Dorcas from Acts. The hymn was created to honor the tenth anniversary of the first ordination of a woman in the Lutheran Church in America.” (Glory to God)

Indeed, Ruth is rightly included among the faithful women cited in the text of this hymn. Naomi and Elimelech, Ephrathites who moved with their two sons, Mahlon and Chilion. They moved to Moab because of a famine in their homeland. In time Naomi was bereft of her husband and her two sons married Moabite women, Orpah and Ruth. In time they too became widows and Naomi pleaded with her daughters-in-law to return to their families. Both Orpah and Ruth would have been within their rights and the custom of that day to return to their own families. Orpah relented, but Ruth remained steadfastly by Naomi’s side.

Ruth would return with Naomi to her homeland and Ruth would remarry one of her late husband’s kinsmen, Boaz. Ruth and Boaz would have a son, who would become the grandfather of King David. Ruth is remembered for her loyalty and devotion. In addition to being a faithful woman, Ruth would be numbered among the ancestors of Jesus.

Heavenly Father, we thank You for all the faithful women mentioned in this hymn and whose stories we read in the Bible. We also give You praise and thanks for the faithful women we have encountered on our pilgrimage of faith. Help us to appreciate their faithfulness and to emulate it in our own lives. In Christ’s name, we pray. Amen.