Frankly, I am just as glad that I don’t remember my dreams! 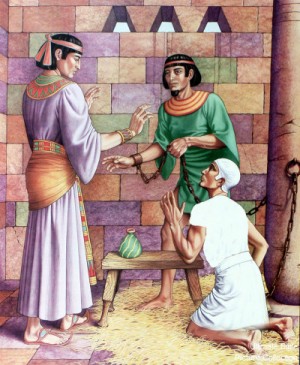 “They said to him, ‘We have had dreams, and there is no one to interpret them.’ And Joseph said to them, ‘Do not interpretations belong to God? Please tell them to me.’” Genesis 40:8 (NRSV)

Scientists tell us that we all dream. Some people vividly recount their dreams. It is rare that I awaken and even remember my dreams.

From what I have read in this story about Joseph, when I do dream, I am not likely to tell my dream to someone to interpret its meaning. While the dream might be interpreted to have a favorable outcome as it did for the cup bearer, it also could be interpreted to have disastrous consequences as was the case for the chief baker. So Joseph, if by some rare chance I share my dream with you; then let us leave the interpretation to God!

Now if I had been the cupbearer, then I would have been thrilled to have learned that I would soon be released from prison and restored to my former position as a servant of Pharaoh. If I had been the chief baker, then I would have hated to hear that my life would end in three days, that I would meet a gruesome end and that I was totally powerless to affect a happy ending to my story. I would be so obsessed with that prediction that I could not enjoy seeing the sun coming up on a new day, that I could not affirm that life is good as people, including myself, went about the day’s daily activities, and that I could not look up at the moon and stars and be lost in the beauty and wonder of God’s world. In that sense I would really have died three days earlier.

The truth of the matter is that none of us knows for certain how many days we have left to live. It could be three, thirty, three hundred, or three thousand. It behooves us to make each day count … to make the best of each day of life that we are given. Meanwhile we should trust God as did the Psalmist who wrote: “In your book were written all the days that were formed for me, when none of them as yet existed.” (139:16b)

O Lord, who neither slumbers nor sleeps, we thank You for restful sleep and that we can awaken to a new day refreshed. We thank You for the ability to dream even when we cannot readily recall what we dream. Help us to make every day of life count that You give us and to make the best of each day, regardless of the quantity. These things we humbly ask in Jesus’ name. Amen.