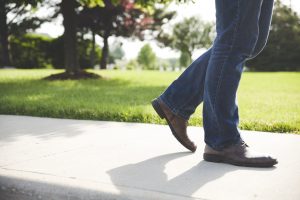 Those with good sense are slow to anger,
and it is their glory to overlook an offense.

Many of the people at First Pres had the honor and joy of knowing Dr. Bob McLeod. Those who weren’t around when he was alive may recognize the name that graces our church’s fellowship hall (AKA McLeod Hall, named in honor of Dr. Robert L. McLeod, and his wife Ruth.)

The McLeod’s were married for over 60 years at the time of her death. I had once asked Dr. McLeod to share with me the secret of a six decade long marriage. He responded: “Fresh air.” As I asked for elaboration he continued, “Any time I feel like saying something foolish to my wife, I go and take a walk around the block and think about it. After some fresh air, I usually don’t say what I was going to say.”

I don’t know what foolish things Dr. McLeod might have kept from saying, but if this husband was like many of us in a relationship, some of his comments might have been concocted in anger. We do well to think about our responses and actions, and then overlook the offense that triggered them.

Dear God, let me follow in Your footsteps that in some instances I too might be described as slow to anger and abounding in love. Amen.