From Pit to Pedestal! 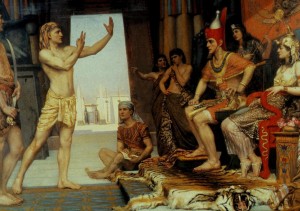 You see Joseph first found himself in a pit in Dothan after his brothers determined it was time to get this dreamer out of their hair. He was sold to some Ishmaelites, who then sold him to Potiphar the Egyptian. He quickly rose to prominence in Potiphar’s household and for a short while landed on a pedestal. Then Potiphar’s wife falsely accused him of improper advances.

Potiphar then had Joseph thrown into another pit (prison) for violating the trust he had placed in him. Joseph now used his gift to interpret dreams to the cup bearer’s delight and the chief baker’s horror, both of whom were incarcerated with him. Then Pharaoh was disturbed by two dreams he had and he was greatly dissatisfied that none of his advisers could help him. It was then that the cup bearer, who had been restored to his position and who remembered that Joseph correctly interpreted his dream, told Pharaoh about one of his prisoners. Pharaoh called Joseph out of prison, told him his dreams, and eagerly listened to his interpretation. Pharaoh was impressed that God revealed to Joseph the meaning of his dreams and so recognizing his gift, Pharaoh quickly bestowed on Joseph great power and authority. Given the way his life had gone thus far “from pit to pedestal” twice, I wonder if Joseph wondered how long his being favored would last this time.

The truth is we all experience ups and downs in our lives. The thing we need to remember is that God is always with us … when we are down and when we are up. God will never fail us nor forsake us. As God was with Joseph through those times “from pit to pedestal,” so God is there with and for us!